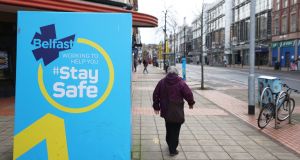 A street in Belfast amid lockdown. The North has recorded another 25 deaths from Covid-19. Photograph: Liam McBurney/PA Wire

The deaths of another 25 people with Covid-19 were confirmed in Northern Ireland on Sunday, bringing the total death toll from the pandemic collated by the North’s Department of Health to 1,606.

A further 822 cases of the virus were also confirmed.

The latest figures come as a health trust boss warned that Northern Ireland’s hospital system is facing huge pressure as it braces for the peak of Covid-19 patients needing intensive care treatment.

As of Sunday, there were 840 coronavirus patients in the region’s hospitals, 67 of whom were in ICUs.

The numbers in ICUs in the North are set to increase in the coming days and peak before the end of January.

Jennifer Welsh, chief executive of the Northern Trust, outlined the situation in the two hospitals in her area, the Antrim Area and Causeway hospitals.

“At the peak of the first wave in April across both Antrim and Causeway hospitals, the highest number of Covid-positive patients that we had was 73, and then in November the highest number that we had was 102, and here we are beyond that, peaking on Thursday actually at 202 patients, we’ve just dropped below that just slightly,” she told BBC Northern Ireland’s Sunday Politics programme.

“So huge pressure across the hospital system.”

Ms Welsh said the hospitals were coping but only due to the “great cost” of cancelling other services, such as cancer surgeries.

“We have only been able to do this because we have had to stand down so many other things,” she said.

However, she warned that the ICU admission rates were still rising.

“We are not yet at the peak of those intensive care admissions and we expect that to come later this week,” Ms Welsh said.

“We have done so much work in preparation for this.”

She said prior to the pandemic there were seven ICU beds at Antrim Area Hospital.

Ms Welsh said that had now increased to 14, and 11 of those were occupied on Sunday.

“All of the hospitals, particularly the big district general hospitals, have all doubled their ICU footprint in preparation for this,” she said.

“And all of us are already working well beyond what our normal capacity would be.”

Northern Ireland has potential extra ICU capacity available at its Nightingale hospital in Belfast, though clinical staff from other hospitals in the region are required to operate that facility at the City Hospital. – PA