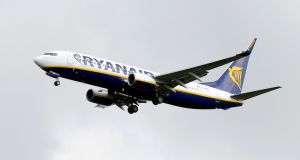 Ryanair said it would reimburse the couple “for any extra costs incurred” and fly them home free of charge. File photograph: Nick Ansell/PA Wire

Ryanair has said it will fly an Irish couple home from Poland free of charge after they were refused permission to board a flight from Krakow to Dublin because their negative Covid-19 PCR test results were printed in Polish.

The airline said it would reimburse the couple “for any extra costs incurred” and that their experience was “an isolated case”.

The couple, who asked not to be named, were booked to fly on Sunday after visiting family in Poland, but said they were told by Ryanair staff that a change in travel rules meant they could not fly to Ireland without proof of a negative Covid-19 test in English.

The couple, who had paid for tests at Krakow’s university hospital two days previously, were travelling with a printout of their negative results written in Polish.

The couple said they showed Ryanair staff the Department of Foreign Affairs website which stated that a negative PCR test was needed to enter Ireland but did not mention any need for translation.

They also noted there had been no mention of the rule change in email correspondence from Ryanair in the week leading up to the flight.

“The man we were speaking to who worked for Ryanair was Polish so he could read that the test was negative. But he told us that Ryanair had been instructed not to approve us and that if we flew, they’d have to pay for our return flight to Krakow to bring us straight back and pay a fine.”

The couple said a staff supervisor showed them a printout which stated they could not travel without a negative test in the English language.

“It was strange, there was no email address on the document but she said she’d mailed immigration asking whether we could travel,” the man said. “She apologised and said: ‘It’s not our fault, it’s Irish immigration’.”

The couple said Ryanair staff claimed other travellers due to fly that day had been affected by the same change in rules. After leaving the airport the pair contacted the Irish embassy in Warsaw who, they said, knew nothing of the rule change.

With limited flights departing Krakow for Dublin, the couple must stay in Poland until next weekend and organise another Covid-19 test before travelling.

“[Ryanair] said we can get the exact same Covid test done in Polish and will be allowed to board the plane,” the couple said. “Apart form the lost money we just feel like we’re being declined entry into our country even though we did everything right. You feel like an intruder.”

“Ryanair complies with all Government travel restrictions and this is an isolated case,” he said, adding that the couple’s documents were “sufficient for them to travel and we have since made contact with the customers to resolve this matter”.

At the time of writing, the Department of Foreign Affairs website states that as of Saturday, January 16th, all passengers coming into Ireland are required to have a negative or “not detected” result from a pre-departure Covid-19 PCR test taken within 72 hours prior to arrival.

While passengers must present evidence of their negative test before boarding their plane or ferry, there is no mention on the website of a need for translation into English.