Taoiseach suggests anniversary of Republic should be marked annually 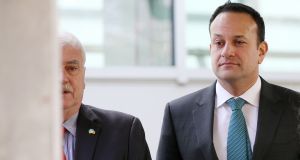 Taoiseach Leo Varadkar will speak at an event in the Royal Irish Academy on Thursday to mark the 70th anniversary of the Republic of Ireland. Photograph: Laura Hutton

Taoiseach Leo Varadkar has suggested that the anniversary of Ireland becoming a republic should be marked every year.

Mr Varadkar said the coming into being of the Republic of Ireland on April 18th, 1949, was for many the “culmination of a lifelong dream”.

Mr Varadkar will speak at an event in the Royal Irish Academy (RIA) on Thursday to mark the 70th anniversary of the Republic.

He said he had an open mind on how the anniversary should be marked and when it should happen.

However, he believed “it is important that it is remembered in some way and that people are aware of the history of our country and the different stepping stones on the way to freedom”.

The Republic of Ireland occurred as a result of the repeal of the External Relations Act, which was the last link to the British monarchy.

Then taoiseach Éamon de Valera wished to retain the link in the hope that it might help end partition. It led to the unusual situation where the credentials of Irish ambassadors had to be sanctioned by the British monarch.

The interparty government led by John A Costello had the Act repealed following a famous leak to the Sunday Independent which coincided with Mr Costello’s visit to Canada in September 1948.

It was replaced by the Republic of Ireland Act 1948, which came into force on Easter Monday 1949, coinciding with the 33rd anniversary of the Easter Rising.

In response the British introduced the Ireland Act 1949, which held that Ireland had left the British Commonwealth and that the status of Northern Ireland would not change without the consent of a majority in the North.

Mr Varadkar believes Easter Monday could be the time to mark the anniversary of the Republic on an annual basis.

“Perhaps it is best to do so through academic debates, discussions and exhibitions, like we have today. Perhaps it is only the significant anniversaries that should be commemorated, such as the 75th anniversary in 2024.”

In his speech, he will suggest that the greatest legacy of the declaration of the Republic is that Ireland’s “destiny is no longer dependent on our nearest neighbour”.

“Our history has shown that symbols matter, dreams matter. The achievement of 70 years ago was a significant moment in our development as a country and we should be honoured to recognise this and salute the Republic.”

The 70th anniversary of the Republic Ireland coincides with the launch of an online exhibition by UCD Archives entitled Republic to Republic.

Curated by Dr John Gibney from the RIA’s section on foreign policy documents and Kate Manning of UCD archives, it draws on the university’s documents and images from the time of the first Dáil in 1919 to the establishment of the Republic of Ireland.