Paddy Cosgrave ‘no saint’ over US fund tax arrangements 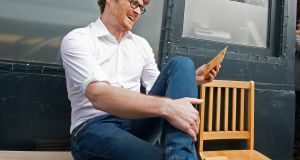 Web Summit founder Paddy Cosgrave has said there “absolutely” could be a perception of hypocrisy over his criticism of Ireland’s tax regime, due to the tax arrangements of a US fund he is involved in.

In recent days Mr Cosgrave has been highly critical of Ireland’s corporate tax regime, which he says allowed for large scale tax avoidance by multinational firms and funds.

Amaranthine, an investor fund set up by Mr Cosgrave with other Web Summit founders, is based in California, but registered for tax purposes in Delaware, an effective tax shelter.

Mr Cosgrave said the fund was registered in Delaware because that was the “standard procedure for the establishment of venture capital funds,” in the United States.

On Wednesday, Mr Cosgrave held a press conference of sorts in a laneway beside a Ranelagh coffee shop, in south Dublin. When asked if his criticism of Ireland’s corporate tax regime could be perceived as hypocritical given Amaranthine’s tax arrangements, he said “oh absolutely.”

When pressed further on whether he thought it was hypocritical himself, he said he was “no saint.”

“I cannot ensure that from the plastic I drink out of, to the clothes on me, to the modes of transport that I take that I am absolutely always consistent with my views,” he said.

It was up to the public to decide whether that diminished the problem he was trying to raise around Ireland’s favourable corporate tax system, he said.

Mr Cosgrave admitted to running an anonymous Facebook ad campaign last week, which promoted Ireland as destination of choice for companies seeking to engage in tax avoidance, to make a point around tax loopholes.

Facebook has removed the page, Irish Tax Agency, over a violation of its policies against impersonation.

The ads contained the tagline “reduce your taxes on global revenue to one per cent”. Users are told that “companies have saved billions in tax by relocating to Ireland from high tax EU nations”.

Overall Mr Cosgrave said he spent a “very very small amount” of around €20,000 on the campaign, buying targeted online ads.

The social media ads were targeted at workers in the European Commission, the IMF, the OECD, and political parties and journalists interested in the area, he said.

“I think there is a great crime being committed on almost every Irish person without exception, in terms of billions in revenue that should be taxed being siphoned out of this country,” he said.

Speaking earlier on RTÉ Radio One, Peter Burke, Fine Gael TD and Oireachtas finance committee member, accused Mr Cosgrave of using his influence in a “very underhand way” to make assertions about the Irish tax regime “which are factually incorrect”.

Mr Burke said the Government has already moved to regulate schemes that Mr Cosgrave has complained about, adding that Ireland does not meet any of the criteria for a tax haven as laid down by the OECD.

Mother (93) has right of residence upheld despite judgment against son 18:16
Man who killed Jastine Valdez shrugged before being shot by gardaí, inquest told 18:09
Yacht captain guilty of drunk sailing had ‘God given right’ to be on Liffey 18:08
Social Democrats to ‘radically scale up’ number of new homes 17:59
Over 65s are expected to ‘crawl into corner and die’, says election hopeful Valerie Cox 17:56