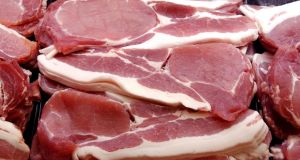 People who stick to NHS guidelines on red and processed meat consumption still increase their risk of bowel cancer by a fifth compared with those who eat very small amounts, a study part-funded by Cancer Research UK found. Photograph: Andy Butterton/PA Wire

Even moderate amounts of ham, bacon and and red meat are linked to bowel cancer, experts have warned.

People who stick to NHS guidelines on red and processed meat consumption still increase their risk of bowel cancer by a fifth compared with those who eat very small amounts, a study part-funded by Cancer Research UK found.

The department of health in the UK said that while meat is a good source of protein, vitamins and minerals, people should cut their intake of red and processed meat to about 70g per day, which is the average daily consumption in the UK.

The World Cancer Research Fund (WCRF) said there is strong evidence that eating processed meat (such as salami, bacon and ham) is a cause of bowel cancer, while eating a lot of red meat (such as beef, lamb or pork) also increases the risk.

For the new study, published in the International Journal of Epidemiology, experts examined data from 475,581 people aged 40 to 69 at the start of the study and followed them for an average of 5.7 years.

The study found people consuming an average of 76g per day of red and processed meat had a 20 per cent higher risk of bowel cancer compared with those who ate 21g per day.

For red meat only, the risk was 15 per cent higher for people who ate 54g per day (about one thick slice of roast beef or one lamb chop) on average compared with those who had 8g per day.

There was some good news however, with those people having a high intake of fibre from bread and breakfast cereals lowering their risk of bowel cancer by 14 per cent.

Cancer Research UK’s expert in diet and cancer, Professor Tim Key, who co-authored the study and is deputy director at the University of Oxford’s cancer epidemiology unit, said: “Our results strongly suggest that people who eat red and processed meat four or more times a week have a higher risk of developing bowel cancer than those who eat red and processed meat less than twice a week.

“Most previous research looked at people in the 1990s or earlier, and diets have changed significantly since then, so our study gives a more up-to-date insight that is relevant to meat consumption today.”

Existing evidence points to an increased bowel cancer risk for every 50g of processed meat a person eats per day, but the new study found that risk increases at just 25g per day.

Dr Julie Sharp, Cancer Research UK’s head of health information, said: “The Government guidelines on red and processed meat are general health advice and this study is a reminder that the more you can cut down beyond this, the more you can lower your chances of developing bowel cancer.

“This doesn’t necessarily mean cutting out red and processed meat entirely, but you may want to think about simple ways to reduce how much you have and how often.

“Although breaking habits we’ve had for a long time can be hard, it’s never too late to make healthy changes to our diet.

“You could try doing meat-free Mondays, looking for recipes using fresh chicken and fish, or swapping meat for pulses like beans and lentils in your usual meals.”

She said reducing the amount of red and processed meat eaten regularly could also cut salt and saturated fat in the diet and decrease the risk of cardiovascular disease. - PA

Cabinet Analysis: 26% of new Minister positions allocated to women 14:21
Taoiseach had ‘no idea’ Barry Cowen was convicted of drink driving in 2016 14:14
Martin acknowledges disappointment from many on missing out on minister jobs 14:01
More than 63,000 end claims for Covid unemployment payment 13:14
Belfast Council apologises to families unable to attend cremation of loved ones 12:43