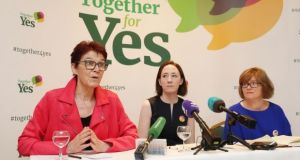 Women have been intimidated when accessing abortion services in the State and such “chilling” behaviour could deter more doctors from signing up to provide terminations, pro-choice campaigners have said.

The issue has led to criticisms of the Government for not yet following through on its commitment to introduce so-called “exclusion zones” around service operators such as hospitals.

Abortion rights advocates yesterday insisted that women who can access services should be able to do so “without being attacked”.

They were speaking at an event to mark the inclusion of the former co-directors of the Together for Yes campaign in last year’s campaign to repeal the eighth amendment being included in Time Magazine’s annual list of the 100 most influential people in the world.

Grainne Griffin, founding member of the Abortion Rights Campaign (Arc); Orla O’Connor, director of the National Women’s Council of Ireland; and Ailbhe Smyth, convenor of the Coalition to Repeal the Eighth Amendment, have included in this year’s selection.

Ms O’Connor said legislation protecting access to services was flagged as a Government commitment but appeared to have fallen down its priority list.

“There is more intimidation happening than I think is perhaps being shown because we are concerned about how that might deter people and also act as a chilling factor for other doctors to come on the lists in terms of them being able to provide service. So this is a really critical issue,” she said.

The Department of Health said it was Minister Simon Harris’s intention to introduce the safe access legislation and that a proposal would be drafted by the summer.

“The intention of the legislation would be to allow patients, service providers, healthcare staff and members of the public to enter such premises without fear of intimidation or harassment,” it said.

Ms Smyth said inclusion in the Time list was “evidence of the significant international ‘ripple’ impact” of the repeal campaign. The proposal to remove the eighth amendment was carried in a referendum last May, with 66 per cent of voters supporting it.

“The referendum result here in Ireland was a real boost for the morale of pro-choice campaigners throughout the world; and we hope it can be a beacon of light wherever and whenever abortion rights are denied, restricted or under severe threat,” Ms Smyth said.