Varadkar among crowd of 13,000 attending first of four days of racing at Dublin venue 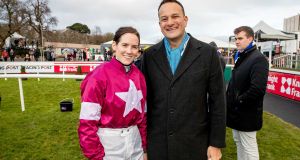 Leo Varadkar was wearing more clothes on his second festive outing of the season than on his first and looked a whole lot happier for it.

The Taoiseach followed up his freezing dip at the Forty Foot in Dublin on Christmas Day with an almost equally traditional visit to Leopardstown Racecourse for the first day of the four-day winter meeting and was guarded against the elements by a heavy wool coat and blue scarf.

If he had been sent a fashion memo ahead of his day at the races he clearly hadn’t read it and, as a result, stood out as one of the few men coming through the turnstiles not wearing a tight-fitting plaid suit and slip-on shoes over sockless feet.

As in recent years, there were more flat caps on display than in the Healy-Rae parlour or a ferret festival in the north of England and while the Taoiseach looked distinctly relaxed as he sauntered through the crowd talking on his mobile phone, he also looked a little confused.

He wandered up to where a cash machine used to be located close to the entrance and was disorientated for moment by its disappearance before setting off again with purpose. “I’ll be placing a few bets alright but I need to find an ATM first, it’s moved,” he told The Irish Times.

He described his Christmas Day swim as “cold but lovely” and said he was a keen racegoer and tried to come to Leopardstown every year.

The weather gods were smiling on him this year as they were on thousands of others and after a miserable start to St Stephen’s Day, the clouds cleared on cue and the sun came out in time for the first race.

Young women – many draped in elaborate outfits and marinated in fake tan – milled around greeting friends.

“I absolutely love dressing up and meeting all my friends,” said Sarah Young from Greystones. “I’m a bit scared of the horses, to be honest, but it’s just such a great atmosphere here. I’m not big into the betting either. I’m always afraid I’ll lose.”

It was a fear shared by Georgie Banim from Clonskeagh. “All my friends come here every year, so I love it. I bet sometimes but I nearly always lose,” she said.

Jamie Maher from Lucan was much keener on horses and while he was losing his Leopardstown virginity on the first day of the festival, he was hoping not to lose his shirt.

“It is my first time at here but I’ve placed a few bets before. Hopefully I will win a few bob because me and my girlfriend are heading over to the World Darts Championship next week and it would be nice to have some spending money.”

As he spoke, the aforementioned girlfriend, dressed in a red frock with a fascinator in her hair, strolled over. Lauren Russell also from Lucan shook her head when Jamie quipped about the amount of time it took her to get ready.

“Ah no, I didn’t spend too long at it at all,” she insisted. “I just got someone to do my hair and my make-up. It is my first time at a race meeting and I love it so far. Mind you I’m only in through the door: I’m looking forward to a glass of champagne now,” she said as the pair wandered off.

It was a first day’s racing too for Sipho and Thabang Bobe from South Africa.

Sipho has been living in Ireland for almost five years, while her partner was visiting her for Christmas. She was wearing a short-sleeved dress from a designer in South Africa and he was in a full-length coat, complete with scarf and gloves.

“I think I am more used to the Irish weather than him,” she said. “We wanted to try something different this Christmas and I used to work in a Paddy Power call centre and we always had people calling in during the festival so we thought we’d give it a go. We are going to place a few bets for sure and hopefully we will win.”

Fast forward five races and lady luck was not smiling on the pair. “No, we’ve won nothing yet,” said Sipho.

Towards the end of the day, the Taoiseach found himself presenting a trophy to Drumconnor Lad trainer Adrian Keatley. It was his final runner as an Irish-based trainer before he relocates to England in the new year.

The big winner on the course was Rachel Blackmore, who won the Racing Post Novice Chase, the day’s feature race, on Gigginstown Stud’s Notebook, a horse trained by Henry de Bromhead. Blackmore was greeted in the parade ring by Gigginstown manager Eddie O’Leary.

But the biggest winners of all were the race organisers as more than 13,000 punters poured through the doors on day one, marginally up on last year.