Sligo community playground shuts due to lack of insurance 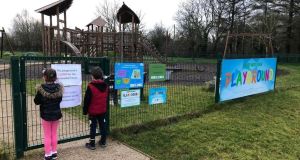 Closure of the Curry-Moylough community playground in Co Sligo was described as a ‘huge loss’. Photograph: Susie McDonagh

A playground that volunteers in Moylough, Co Sligo, fundraised to help build has had to close as they cannot find insurance cover.

The closure has happened less than a year after it was opened. In 2015, a group of volunteers established a committee to build a playground for the small rural community in Curry-Moylough, which after several setbacks was opened on St Stephen’s Day last year.

Last week the gate of the playground was chained shut with a notice placed on the entrance stating it would be closed for the foreseeable future. The new playground has had to close as the volunteers have been unable to receive a quote for insurance cover, said secretary of the group Susie McDonagh.

Everyone came back and said no . . . No insurers will take us on, companies are not taking on any new business

The small company set up by volunteers to deliver the project had been insured by UK-firm LeisureInsure, who earlier this year announced it would be withdrawing from the Irish market, throwing the viability of thousands of companies in the leisure sector into doubt.

The Curry-Moylough community group paid a premium of €3,500 last year and has had no claims, but cannot find a replacement insurer.

Since September the group has contacted 15 insurance firms and brokers but none would even provide a quote to insure the playground, said Ms McDonagh.

“Everyone came back and said no . . . No insurers will take us on, companies are not taking on any new business,” she said.

The process had been a “nightmare” for the small team of 12 volunteers, she said. “Here we have this wonderful facility for children that is closed . . . we feel hard done by,” she said.

Ms McDonagh works as a teacher and has two young children who love the playground, she said.

Sligo County Council would not build a playground in the area, so the group of volunteers took up the challenge and “had to go through a lot to get it”, she said.

The process of applying for the Leader grant was difficult. And the first company selected to build the facility after a tendering process went into liquidation, said Ms McDonagh.

Even after it was built the group had to constantly fundraise to cover small upkeep costs and insurance. The playground also had to be checked three times a week by one of the volunteers as part of the insurance cover, said Ms McDonagh.

Playgrounds owned by the local authority are covered under its insurance policy, she added.

The new playground had brought a lot to the area and the community had “worked so hard for it,” she said.

To have it closed was a “huge loss” and local people were angry at the situation, she. The community had put a “phenomenal” amount of work into getting the playground built, said Ms McDonagh.

“I can’t see an answer to this unless the council or the Government step up and help us.”