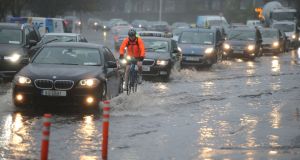 Consequences of climate change, such as flooding, extreme temperatures and wildfires, will pose a number of challenges to public welfare. Photograph: Nick Bradshaw / The Irish Times

Climate change is likely to result in an increase in waterborne diseases, skin cancer diagnoses, lung diseases and temperature-related mortalities in Ireland, a specialist in public health medicine has warned.

Dr Ina Kelly, chair of the HSE’s Public Health Medicine Environment and Health Group, said that while often the focus of the climate change discussion is on environmental changes, there will also be a negative effect on people’s health.

“At the moment, they’re not necessarily quantifiable, but there are a huge variety of health effects of climate change,” Dr Kelly said. “Climate impacts on weather, extreme weather events impact on all sorts of environmental issues like our road infrastructure, our car supplies, and all of those things move on to damaging our health in some way or another.”

Dr Kelly said the consequences of climate change, such as flooding, extreme temperatures and wildfires, will pose a number of challenges to public welfare.

“With flooding, for example, you can have drowning, and the mental health impacts of being displaced. It’s also likely that we will see more water-borne diseases such as enterotoxigenic e coli, which breaks down blood cells and can damage kidneys,” she said.

“Then there’s UV radiation. UV causes a very large number of skin cancer cases every year and if the weather gets warmer, people are more likely to expose themselves to the sun and the UV index might be higher during warmer weather and so on.”

With rising temperatures there will also be more wildfires, Dr Kelly said, which will increase air pollution.

“We have more drought during warm weather so wildfires are more likely to occur and they’re more difficult to manage because of the lack of water. Therefore, they bring a huge air pollution problem as well,” she said.

“The thing that’s important is that we have a considerable vulnerability to air pollution in Ireland. Our numbers of people with asthma and chronic obstructive pulmonary disease are quite high. So we will have a portion of people who are particularly at risk.”

Dr Kelly said there is a need to make modifications to mitigate the health effects climate change will have on people, such as retrofitting houses or putting in emergency response plans.

“During the heatwave in 2018, which we’re expected to get more of with climate change, the temperatures in buildings wasn’t always right. I do know from talking with people that their houses were very warm,” she said.

“We all know ourselves that sometimes we’re overheating and we don’t really notice it until we’re feeling unwell. It’s something really that requires external monitoring and we’ve a bit to go on that. Ireland needs a public heatwave plan.”

She called for a “joined-up approach” in tackling climate change and the challenges it poses.

“One thing with climate change that’s important to see is that they [the consequences] are all interdependent of each other, and we cannot plan alone and we can’t work alone. We need to work with each other,” she said. “In the long run, I think we’ll get more efficient and effective societal and environmental improvements if we do.”