‘People were queuing from 3am’ – rampant consumerism resumes after Christmas break

Shoppers queue outside shops in search for sales bargains 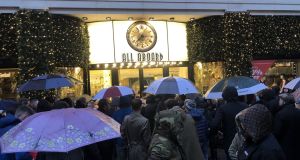 Most shops in Dublin city centre were only closed for about 36 consecutive hours this week but the short shopping drought had some people so anxious they were willing to get out of bed in the dead of Christmas night to queue outside retailers hours before dawn.

First out of the the sale blocks on St Stephen’s Day was Next, which opened its doors at 6am, by which time there were already dozens of people waiting in line outside its Henry Street store.

Most other retailers opted to give their staff and their customers something of a lie-in by holding off the start of their winter sales until 9am.

“When the doors opened there was around 100 people in the queue, I reckon,” one Next employee said.

“The security guard told me there were people queuing outside before 3am and some of them got a little bit antsy when we were coming into work because they thought we were jumping the queue.

“I’ve never seen it like that before – it’s a first for me,” he added before returning to the job at hand, namely trying to bring some order to the mountains of clothes assessed and then discarded by bargain-hunting shoppers.

For hours the beep of the Next security scanners was the only sound on Henry Street. An unfortunate security guard was charged with rummaging through bags and checking receipts and removing errant tags.

Sisters Tammy and Danielle from Dublin 1 had been shopping since just after 6am and were standing on Henry Street wondering what to do next.

Tammy was buying clothes for her holidays in Florida later this week while Danielle was buying ahead of a trip to Tenerife.

“The winter sale is great for the summer clothes,” Tammy said. “And we both have young kids so it’s not like we were up late drinking or anything.”

She said the plan was to waiting until JD Sports opened and then hit Zara before heading home. “It’s not really like it used to be, with some of the sales starting before Christmas, with all the others staring online on Christmas Day,” she said.

Deirdre Casey Hanly and her son Craig were first in line outside Brown Thomas. They had travelled into the city from Straffan, Co Kildare. Surprisingly, perhaps, it was the teenager – in his Leaving Cert year – who was the keenest shopper of the pair.

“Last year I was first in the queue as well. I was here for 4½ hours then but it was worth it. This sale is ridiculous.

He had his eye on a Balenciaga roll-up jumper that normally retails for just under €1,000. For a jumper.

He had done his homework carefully and was in the store on December 20th and 24th trying on the clothes he wanted and mapping out his route to them ahead of the big day. He said he planned to spend money he had got for Christmas and had some store credit left over from last year. He had a budget of €1,500.

“He saves very hard,” his mother said. “It is a fun thing for him and he has been living for the sales – it is the highlight of his Christmas. I am here to support him. I am a very sensible shopper myself and would not be that into labels although I might buy myself a backpack if I see one.”

Emma Carey was in the same queue. She is from Mayo but lives in Dublin and hits the sales in the capital once every two years. “I do it for fun more than anything else, and the years that I come in I tend to be close to be top of the queue.”

She was in the market for clothes and like Craig in front of her, she had done her homework, although perhaps not as assiduously. “I did come in and have a quick look before Christmas and I was online so I have a fair idea what I am after.”

She said she anticipated spending “maybe €400 or €500” and would be done and dusted by 10am. “Usually I am finished in 10 minutes but that is when I am shopping for a wallet or a bag, but when it is clothes like now it is a different story.”

Lyndsey Carroll from Glasnevin had one very specific purchase in mind. “When I shop in the sales usually it is for my kids. I have been at the top of the queue in the Next sale in the past and I have had all my shopping down and am home by 8am. But this year I am buying for myself,” she said.

“I have a wedding to go to on New Year’s Eve and I refuse to pay full price for the dress I want. There is nothing worse than buying something for €400 and then seeing it on sale for €80. It is a bit of money saving and a bit of craic,” she said.

She said the dress she wanted had been at full price, €360. “I don’t know if it will be on sale so I am taking a gamble. I’d be delighted if I got it for half price.”

Shortly before 9am, the speakers outside BTs were playing Magic Moments and the queue had swelled to a couple of hundred.

Craig Hanly and his mother were still in pole position and looking focused.

There was a line outside Marks & Spencer too and a handful of people waiting for the River Island doors to open.

Back across the river, a hundred or so people were standing outside the doors of Arnotts when the doors opened at 9am. There was a moment’s pause before the heaving throng swept into the shop. It was almost as if they were collectively wondering what they were doing there.

Many people made their way quickly towards the bags and queues quickly formed in the shoe department.

Elsewhere, shop assistants chatted among themselves and looked for ways to keep themselves busy as they waited for many more people to come through the doors in search of bargains.

They came as the morning dragged on, seemingly happy to take their place on the treadmill of consumerism after the momentary pause for Christmas.

GP censured over failure to refer suspected meningitis cases to hospital 20:49
Shannon floods: ‘The only way they will get me out of my home is in a box’ 20:43
Ireland ‘lagging well behind’ in newborn screening programme for rare diseases 20:41
Snow and ice warning issued as communities battle floods 21:38
Fianna Fáil's Tom Brabazon elected Lord Mayor of Dublin 20:07