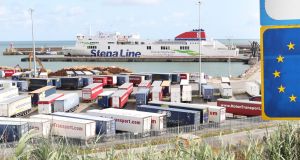 Rosslare Europort: Tents were erected ahead of each Brexit deadline this year for use as emergency inspection accommodation in case of a no-deal scenario. Photograph: Niall Carson/PA Wire

Temporary emergency marquees for Brexit checks which never happened have been put up and taken down a number of times over the last year at Rosslare Europort at a cost of more than €120,000.

The Irish Times has learned that tents were erected ahead of each Brexit deadline this year for use as emergency inspection accommodation in case of a no-deal scenario, as permanent infrastructure has not yet been built.

The marquees were originally intended to be installed to cover the ramifications of a potential no-deal scenario in March. They were first put up in anticipation of the March and April 2019 deadlines, and remained in place until June 11th.

They are likely to remain on site until the threat of a no deal passes, or if any changes are indicated following the British elections

They were then dismantled as the OPW had no use for them ahead of a new Brexit deadline in October.

They were then reinstalled on the October 21st, 2019 in preparation for the October 31st deadline.

“They are likely to remain on site until the threat of a no deal passes, or if any changes are indicated following the British elections. On completion of the final phase of development of the new border control post on the site, expected by the end of January 2020, the marquees will be dismantled and returned,” a spokesman for the OPW said.

According to the Government’s Brexit Contingency Plan, published in July 2019, infrastructure at ports was due to be “refined” and “improved” after the first deadline passed in March.

It said that “permanent state inspection facilities will be constructed on a site adjacent to the existing port”.

“This facility will accommodate inspection bays for SPS (sanitary and phytosanitary) and food safety checks as well as a number of Revenue turnout sheds. The site will also include office accommodation, a documentary and public office, driver welfare facilities, two documentary and identity check facilities” and parking for 35 HGVs, the contingency plan states.

In response to queries about the cost of the tents, a spokesman for the OPW said that “interim infrastructure was put in place at Rosslare Europort to prepare for a possible no-deal Brexit on 29 March 2019. In the period afforded by subsequent Brexit extensions, this has been enhanced incrementally since then. Permanent infrastructure will be put in place to apply the additional customs, SPS and health checks and controls on a long-term basis”.

The cost of their dismantling, removal from site and reinstallation in October 2019 was €8,500. We were not charged while the marquees were off-site

The OPW said the marquees had a “dual purpose for department staff training requirements and for use as emergency inspection accommodation for use in case of a no-deal Brexit”.

“The cost of their dismantling, removal from site and reinstallation in October 2019 was €8,500. We were not charged while the marquees were off-site.”

A source has told The Irish Times that a large fence was also installed and removed at the site. The OPW said the costs for this are not available at this time.

“The purpose of the moveable fencing was for site division and security. Portions of the site were handed over to the client departments for training purposes as they became available. The moveable fencing is necessary to enable our main contractor to proceed with construction works safely, in parallel with department staff training and movements adjacent.

“Given the area in question is an active construction site, moveable fencing is in place for the duration of the works for the safety and security of all parties.

“The costs for fencing are incorporated into the main contract for the building of the border control post and will be available once the works are complete.”