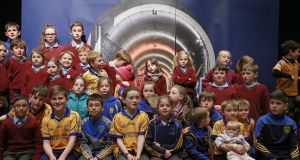 Taoiseach Leo Varadkar has said he is “very concerned” about the impact the development of a proposed route for Dublin’s new MetroLink rail service could have on the community in the Glasnevin area.

Speaking in the Dáil on Tuesday afternoon, Mr Varadkar said the preferred route, the outline of which was published in March by the National Transport Authority (NTA), would cause “enormous damage” to the schools and sports clubs that use the land on Mobhí Road.

He said his message to the National Transport Authority and Transport Infrastructure Ireland is that they should find “an alternative option”.

“In relation to Na Fianna and Scoil Chaitríona and Home Farm as well . . . I have to say I am very concerned and I share the concerns of leaders and other deputies - not least the Minister for Finance - about this particular emerging preferred route.

“I think it would do enormous damage to that club, to Na Fianna, to Home Farm as well, and also to Scoil Chaitríona.

Plans for the €3 billion MetroLink project include a proposal to establish a major infrastructural construction site and an underground train station on Mobhí Road.

This would require the requisition for a period of six years of Na Fianna GAA club’s front pitch, its two all-weather pitches, Home Farm’s soccer pitch, and lands used to access to Irish medium schools Scoil Mobhí and Scoil Chaitríona.

School and sports club representatives strongly opposed the plans when they came before an Oireachtas committee hearing on the matter last week.

Na Fianna chairman Cormac Ó Donnchú told the Oireachtas committee on transport that it fell to the club to inform the two schools of the plans, 48 hours before the plans were publicly announced.

The site also incorporates lands used by an Irish medium naíonra as well as the two schools and concerns have been voiced about the impact the works will have on the Irish language community in the area.

The announcement of the proposed route was met with opposition in the area when it was announced in March. Over 1,000 people subsequently attended a public consultation meeting in Dublin City University to discuss plans with representatives of TII and the NTA.

MetroLink is a central element of the Government’s new infrastructure programme and the route is to run between Swords and Sandyford along a 26 Km route, with a large proportion due to be built underground.

Sinn Féin leader Mary Lou McDonald told the Dáil that using the proposed route would have a detrimental impact on Glasnevin and local schools and the club.

“It is the hub of the entire community,’’ he added.

In a statement, Fine Gael Dublin North West TD Noel Rock said the Taoiseach had rightly recognised the local damage it would to the clubs, schools and community.