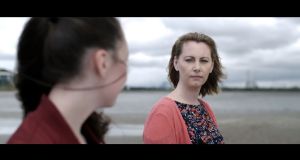 Emma Ní Mhathúna, pictured above in a HSE promotional video for the HPV vaccine, was told by her doctor the smear results from a test in 2013 were incorrect.

Emma Mhic Mhathúna, a 37-year-old mother of five diagnosed with cancer, has said she is one of the women caught up in the cervical cancer screening controversy.

She said she was only told on Sunday that a smear test in 2013 incorrectly gave her the all clear.

In 2016, Ms Mhic Mhathúna was told she had stage 2B cervical cancer after a biopsy, but only found out in recent days a smear test three years earlier had shown signs of cancer, which were not picked up.

“If I had got the right results at that time, I wouldn’t be where I am now,” Ms Mhic Mhathúna told RTÉ Raidió na Gaeltachta on Tuesday.

It emerged on Monday that 162 women who developed cervical cancer, had not been told by the Health Service Executive (HSE) that previous smear tests which gave them the all clear were incorrect. If the signs of cancer had been detected in the earlier tests women may have received treatment earlier.

“Last Sunday, my doctor in Dublin called. He said that he hoped I was reading the stories in the paper about the CervicalCheck. He said he didn’t have all my files in front of him, but that I was one of the women involved. I asked him to call Cork and to tell them to take good care of me,” she said.

Ms Mhic Mhathúna is currently receiving treatment at Cork University Hospital, and has been living in Co Kerry for the last six months.

In a follow-up phone call, her doctor informed her the smear results from a test in 2013 were incorrect. “The first indications of cancer, the cells changing in the body, were there,” she said.

“If I had got the right results at that time, I wouldn’t be where I am now . . . I had a kidney infection in January, I have a lung infection now. My life . . . well I’m not too worried about my life, but the kids are very very young”, she said.

“I’ve an appointment with my doctor today because my head is spinning. I’m still going round in shock, is it true?”

She attended regular check-ups in hospital every four months. On April 4th she was given the all clear in Cork University Hospital, she said, but explained she had not been feeling well lately.

“On 15th April, that’s a fortnight ago, I knew there was something wrong with my body again. I went to the doctor and he found something that was more than 1 cm there . . . I was at the hospital last week and had to get a biopsy done yesterday, ” she said.