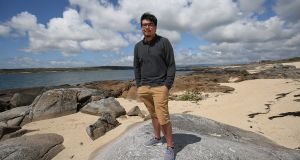 A member of the Mohawk Nation was among 20 Canadian students to complete an Irish language course this week in An Cheathrú Rua in the Connemara Gaeltacht.

Tahothoratie Cross was the first participant in a new annual scholarship programme announced in Dublin in April which will see a scholar from Kahnawá:ke – a First Nations territory located in the Canadian province of Québec – attend an Irish language course every summer.

Despite having little knowledge of Ireland before his arrival in the country Tahothoratie Cross described his time here as “an amazing experience”.

He said he was made to feel at home by the community and by the host family.

“They really welcomed us into their home. The family was in and out of the house all day, so you get the feeling that it’s really (like) home. They really make you feel comfortable right away.”

He participated in cultural activities including céilí dancing, singing and hurling workshops.

Cross told The Irish Times the experience of learning a new language was exciting and “really fun”. The course was aimed at students who are at a level just higher than beginners.

“It surprised me because I thought I would be easily frustrated trying to learn a language at a higher level than the one I was at .” He said the course, where the focus was on learning through conversation, was very practical.

“Some of the rules I’m beginning to get, the urú and the séimhiú and figuring out the past tense (aimsir chaite) and the present tense (aimsir láithreach). I feel fairly confident about that. It’s really the pronunciation and spelling of words that has been the most difficult part.”

Despite some differences, he saw similarities between the Gaeltacht and Mohawk communities. Both Mohawk (Kanyen’kéha) and Irish have been subjected to oppression in the past, he said, yet each community shares a sense of pride in their language.

He also observed how both languages are viewed very differently by some in society.

“Here and back home many people don’t see the value in having your language. A lot of the time they will say, ‘you don’t need it for your job so what’s the point of learning it, it’s a dead language’.

“The struggle is finding a way to show the people that there is value to having your language,” he said.

Government Chief Whip and Minister of State for the Irish Language Seán Kyne congratulated programme participants during an awards ceremony to recognise the completion of their studies at a ceremony in An Cheathrú Rua on Thursday evening.

James Kelly, chief executive of the Ireland Canada University Foundation said “A remarkable 4.5 million Canadians trace their ancestry back to Ireland, and it is the mission of ICUF to build new and engaging connections between Ireland and Canada, so that the friendship between both countries can thrive into the future.

“The Clár Gaeilge is a core part of our mission, and this year we are particularly excited to be expanding this programme to welcome a scholar from the Mohawk Nation to join our Canadian learners in Ceathrú Rua.”

Valued at around €2,000, the award is being funded by the Department of Arts, Heritage and the Gaeltacht and the Mohawk community in Canada.