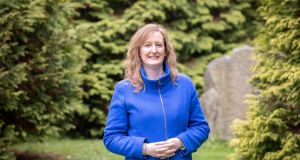 Dr Trish Morgan: “Even the phrase ‘the environment’ makes it sound like it is a thing, and we are not part of it”

You recently captured underwater sounds from the river Shannon. Tell us more

“I wanted to record the underwater sounds of life in the Shannon. I cast hydrophones [microphones that can record in water] into the river and lakes from bridges, from boats and from the banks. I recorded the sounds over a year, to get a sense of the seasonality of underwater life. I was able to work with the recordings and pick out the sounds of little insects and other creatures in the water, and amplify them so they can be heard more clearly.

Why did you do that?

I’m interested in how we as a society relate to nature. This creative practice was a way to make people aware of the richness of the natural world and of the many living systems we can’t immediately see but that could still be damaging.

In April, I presented the ecological sound art piece called The Miracle of the One Thing at a public event in The Dock arts centre in Carrick-on-Shannon, and I have been visiting schools and helping children hear the living things under the water as well as the human noises that those underwater creatures also hear.

What kind of a response have you had?

People have been really interested in hearing the sounds. At the public event, many of the local people had not realised there was so much life in the river. When they heard the sounds, some people told me they felt more protective of the water now – they will consider what they are putting down the sink. This is the kind of awareness I think that can empower people to act locally.

What does your academic research on environmental communication cover?

When it comes to the environment, what do you wish people thought more about?

I think as a society we see ourselves as separate from nature, we think about environmental issues and about the plants and animals as “out there”, as in external to us, and that we have the right to exploit them. Even the phrase “the environment” makes it sound like it is a thing, and we are not part of it.

But we interact with the environment all the time, from breathing and respiration, to how we travel through space, and I think it is more helpful to think of ourselves as being part of a metabolism that has become unbalanced because of our actions.

How do you take a break and relax away from research?

I like to get out of the city and do wildlife photography. I also enjoy yoga, and I really make an effort to encourage a good work-life balance by disconnecting from digital media in the evening.”