Nanomachines set out on a fantastic voyage 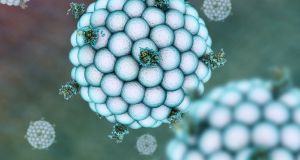 These nanoparticles have been built at a scale small enough to interact with individual molecules. Photograph: Medi-Mation/Science Photo Library

The idea that a tiny machine could be inserted into the body and then travel to the site of damaged or diseased cells to repair those cells onsite has been around since the 1960s.

The 1966 Hollywood science fiction film Fantastic Voyage told the story of a submarine vessel and its crew being shrunk to microscopic size then inserted into the body of a comatose scientist with a mission to repair his brain and save his life. The film made a modest profit for 20th Century Fox. Yet it has remained in public consciousness ever since its release with regular screenings on television.

One part of Fantastic Voyage – the shrinking of a submarine crew – remains in the realm of the scientifically impossible. However, the other – a tiny machine being inserted into the body travelling to the site of tissue damage, and repairing that damage – is now realisable.

“This movie made us realise that by knowing how molecules propagate we can, maybe, achieve their control, and shine a light on the treatment of diseases,” says Dr Michael Barros, a nanomachine researcher at the Telecommunications Software and Systems Group (TSSG) centre at Waterford IT.

A post-doctorate researcher originally from Brazil, Barros comes – like many of the 500 or so researchers around the world now working in the emerging field of “molecular communications”– from an engineering and telecommunication background.

“Around 2005, researchers in Japan started thinking that maybe there is a way to control communication of molecules instead of just transmitting information using electromagnetic waves,” Barros adds.

The idea that a communication network could be set up between cells inside the body, and that commands could be sent to cells or to tiny devices operating inside the body from an operator on the outside was born. The TSSG was there from the start.

Up to now there has been a lot of theoretical work without much progress on applications, but that’s changing, says Dr Sasitharan Balasubramaniam, TSSG director of research –a global leaders in nanocommunications. Their quest is to engineer the miniature cells “to compute like a very simple biological computer”.

“Then we can actually put them into the body – they may remain dormant – and [later] detect, for example, certain enzymes that could lead to disease or to a recurrence of a particular disease.That might then kick off molecules to either kill that disease, or it could give you information that there is something going wrong in your kidney, intestine or your heart,” he adds.

Prof Ian Akylidiz, based at Georgia Institute of Technology, has strong research links with the TSSG. A telecommunications engineer, he recognised the world was full of tiny biological entities – such as bacteria, pheromones and neurons – which communicate with each other in various ways, including transmission of molecules like proteins.

“We realised that these are perfect nano-scale machines in nature,” Akylidiz explains. “When you look at them under the microscope they have processors, memory and transceivers.”

The idea Akylidiz and others had was to genetically engineer natural nanomachines so that they could diagnose and treat disease from inside the body, while being connected to a wireless network. It became “the Internet of Bionano Things”.

The natural nanomachines would enter the body non-invasively – through inhalation or swallowing –and once inside would combat chronic illnesses such as Alzheimer’s, diabetes and Crohn’s disease.

The technical problems around setting up a network to connect nanomachines has largely been solved, Akylidiz notes. The focus of research now is on how the tiny devices can best be engineered and programmed to monitor and control diseases.

The nanodevices inside the body could be connected to a kind of tattoo interface on the skin. The tattoo will gather information from inside the body and convert it into electro-magnetic waves for communication over the network.

A physician could tap into the patient’s data by accessing the secure network, he says. They could assess what’s happening inside the person’s body and programme the nanodevices to respond appropriately; all possible via an app.

One scientist in Ireland working on nanomachines is Dr Cathal Kearney, senior lecturer in anatomy and regenerative medicine at the Royal College of Surgeons in Ireland. He is manipulating DNA strands, by folding them in a manner akin to origami, so that they can be used in their new shape to integrate into DNA of diseased cells and kill them.

The RCSI team have created DNA nanomachines which can carry a chemotherapeutic into cancer cells, in Trojan horse fashion, and destroy chemo-resistant cancer from inside.

The DNA is delivered to the site of the tumour via injection and inside a gel. It is only possible to control DNA nanomachines over a short distance, Kearney says, but this could change. “The second generation is making these DNA origami shapes that can actually move [inside the body] and respond to external input.”

There have been relatively few biological diseases that have been tackled as of yet using molecular communication. Yet there are signs that the field is moving towards applications. For example, nanodevices designed at TSSG have been inserted into glioblastoma patients post surgery to prevent this cancer recurring. The researchers are waiting to see if its successful.

“The whole idea here is if you have a patient, they have cancer, you then take them in for surgical removal of the cancer,” Balasubramaniam points out. “Then you implant these little miniature devices and cells. You close them up and hopefully they will automatically, inside the brain, detect the cancer and kill it.”

Scientists are also looking at how bacteria or stem cells can be beneficially engineered or altered, so that they can be inserted into a diseased or damaged organ and return it to full health. In time, researchers believe it will be possible to monitor disease using a simple app. The biological computer inside the body could give information to the app that something is wrong inside, for example, an individual’s kidney, heart or lungs.

The person would then ingest some engineered cells which had been manufactured in the lab, which would provide the person’s organ with what it needs to defeat the disease. The cells might be just swallowed with water and last a long time in the body.

The ultimate goal is to be able to monitor all the body’s organs and systems, Barros adds, and to identify in hours, or even minutes when there is a problem such as cells when cells start to proliferate at a fast rate as cancer develops in the body.

Nanomachines have been built already and used to detect and treat brain cancer, Alzheimer’s disease and epilepsy. Barros believes most future applications will be in the brain, not because it is easy but because the brain is so important. “I believe this idea of fixing your body using telecommunications principles can become the next neuroscience. I think what we are doing here is going to be incredibly big in the future – we have confidence in that.”

The ultimate goal is to make nanomachines operate inside the body automatically, Akylidiz says. It would be the ultimate in personal medicine as nanomachines could be designed to suit the needs of a particular person. And, it’s not far off.

“I expect that automisation will be between 2025 and 2030,” Akylidiz predicts. “That will help to prolong the lifespan of the people, plus it will also improve the quality and lifestyle of people.”

One major roadblock to the use of nanomachines in medicine is regulation. It’s not clear how, or who, will regulate their use. “It takes forever to get approvals,” Akylidiz says. “Some might argue that there are medicines and people can take those, but it doesn’t solve the problem. It is just mitigating the problem but it is not solving it.”