Staff in institutes of technology to take industrial action 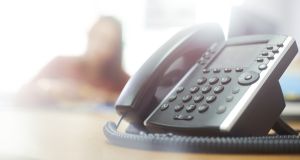 Fórsa said its members would not be making or taking phone calls, video conferencing or responding to or forwarding emails. Photograph: iStock

Library, clerical and administrative staff in institutes of technology around the country are to begin industrial action next week, the trade union Fórsa has said.

The union said the move formed part of a campaign aimed at securing a comprehensive job evaluation exercise.

Fórsa said on Wednesday that it had served notice to individual institutes of technology that, from next Monday, its members would not engage in any form of communication including making and taking phone calls, video conferencing or responding to or forwarding emails.

The union said this followed more than three years of efforts to ensure the implementation of a commitment agreed in May 2015, as part of the negotiations that led to the Lansdowne Road Agreement, in relation to job evaluation for library, clerical, administrative and support grades.

In a letter of notice to the colleges, Fórsa official Stella Griffin said: “After three years of raising the issue – and alerting the Minister to the inevitable consequences of a failure to deliver on the commitment made – we appear to have little choice but to resort to such action.”

“We have exercised enormous patience while trying to reach agreement with employers on an approach to deliver on the commitment. The response to date has been woefully inadequate.

“We believe that we have no other choice but to resort to industrial action following receipt of a mandate for action up to and including strike action from our members,” she said.

The union said the purpose of the job evaluation process was to measure whether or not a specific post was correctly graded. It said it assessed the skills and responsibilities required of a particular post rather than the individual performing it.

Last week the trade union Siptu said it had served formal notice on the HSE that it would be seeking pay rises for healthcare assistants and other health service support staff on foot of a separate job evaluation review.

It said a job evaluation review had found that healthcare assistants and some other grades were entitled to an upgrade on the basis that their roles and responsibilities had changed.