Mixed reaction to ‘heartbreaking’ provision of €60m for emergency accommodation 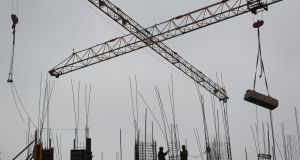 Low-income workers will be able to buy homes at a discount of up to 40% on market rates through a €310m fund announced in Budget 2019. File photograph: Ivan Alvarado/Reuters

Low- and middle-income workers will be able to buy homes at a discount of up to 40 per cent on market rates through a €310 million fund announced in Budget 2019 to provide more than 6,000 affordable homes.

However, they will have to wait until 2020 for the first of these homes to be built.

Minister for Housing Eoghan Murphy last January announced the reintroduction of an affordable purchase scheme, whereby council land would be used to provide homes for people to buy at a discount. The scheme had been discontinued in 2011.

The €310 million is part of an expansion of this scheme and will be used to service the local-authority-owned lands so that housing can be built at a lower cost, with that saving passed on to the qualifying buyer. Single applicants must earn less than €50,000, while the limit for a couple will be €75,000.

The discount will be “relative to the amount of State subvention we have given to service the site”, Mr Murphy said, “but also the notional cost of the land if the house was being sold on the market at the time.”

Buyers will have to live in the house for five years to avoid a “clawback” of the discount given if they sell up, Mr Murphy said.

Almost 17,000 social housing applicants are expected to be accommodated using the Housing Assistance Payment (HAP) as part of this plan.

Funding for homelessness is being increased to €146 million, up from €116 million this year. Some €60 million will be spent on the construction or acquisition of buildings for emergency accommodation, including family hubs. It is hoped this would result in 950 more spaces in family hubs being provided, up from the existing 550.

Chief executive of the Peter McVerry Trust Pat Doyle said he was “delighted” by the budget’s focus on housing, particularly the €60 million for emergency accommodation projects.

“The announcement of an increased budget for a capital programme related to the delivery of new homeless services will enable local authorities and NGOs to increase the availability of emergency accommodation, responding to the growing need for such services, and will help get more people off the streets.”

However, director of advocacy at Focus Ireland Mike Allen said the €60 million emergency accommodation fund broke his heart. “The Minister should have said that it was with great regret that he announced that €60 million. The answer to homelessness is homes.”

Niamh Randall, national spokeswoman for the Simon Communities, said there appeared to be no increase in the targets for social housing.

“There is a commitment to 10,000 [new] units through acquisition, refurbishment and new build, which is the existing target for Rebuilding Ireland in 2019.”