Defence Forces to get extra money for purchases of new equipment

Defence spending next year will increase by €47.5m to almost €1b 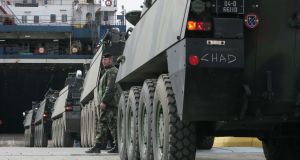 The Defence Forces has received significant extra money for purchases of new equipment next year across the Army, Air Corps and Naval Service.

Morale in the Defence Forces has been hit in recent times because of complaints about wages, shortages of key staff across the forces and the effects of resignations and retirements.

Defence spending next year will increase by €47.5 million to almost €1 billion, though most of the €994 million is absorbed by the pay bill, which will rise €18.5 million. Capital spending will jump €29 million to €106 million.

Minister of State for Defence Paul Kehoe said the upgrading and replacement of equipment would help ensure the Defence Forces could meet its peace keeping obligations on United Nations missions.

“This allocation of almost €1 billion emphasises the importance attached by the Government to ensuring that the Defence Forces have the resources necessary to deliver on all roles assigned by Government, both at home and overseas.” .

Irish troops served with distinction overseas, and Mr Kehoe said the country was proud of them. “The Government remains committed to returning to and maintaining the agreed strength of the Permanent Defence Force at 9,500, and I have ensured that the Defence vote is fully funded to meet the costs for the full establishment figure of 9,500”.

Mr Kehoe added that the additional monies for capital expenditure in 2019 would allow for the upgrade of Mowag armoured personnel carriers; vehicles that allow Irish troops move around in conflict zones.

Light tactical armoured vehicles would also be purchased, and the Air Corps Cessna aircraft would be replaced.

He added that the Naval Service’s LÉ Róisín and LÉ Niamh would undergo a mid-life refit.

Projects to upgrade these facilities across the Defence Forces would commence next year, including at the Curragh Camp in Co Kildare and Casement Aerodrome in Baldonnel, Co Kildare.

An upgrade of the fuel storage safety system in the Naval Base, Haulbowline, Co Cork, would also commence in 2019.

The pensions provision will be increased next year by €10 million to be the projected demand during the year of €249 million.