The exorcists: Bishop setting up team to combat ‘evil forces’ 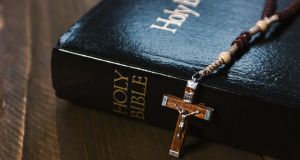 A Catholic bishop has said he is establishing a “delivery ministry” group of people who will be attempting to rid people of “the devil” through exorcism.

Bishop Alphonsus Cullinan says he has received “several requests” from people to help deal with evil forces and one priest in his diocese of Waterford and Lismore is about to start training in the practice of exorcism.

Dr Cullinan warned against the possibility of users of reiki and other healing methods being exposed to evil spirits.

He said he was told by the brother of a reiki master that the man was “working on somebody one day when he actually says he saw a vision of Satan”. He was “scared out of his wits, dropped the reiki and went back to the church”.

Speaking on WLR FM’s Déise Live programme, the bishop said he has received about nine requests in recent years from people in relation to what they believe to be “evil” forces.

“I am just setting up a group, actually, of people who want to be part of delivery ministry, if you like.

“This is something that has to be done in secret because you don’t let these people’s names out and they are going to houses where people maybe have been involved in some kind of new age thing or some kind of seance or that kind of thing and, unfortunately, they’ve opened up a door to an evil force, Satan.”

He said he had never seen an exorcism himself. “But I have certainly felt the presence of evil,” he said. “I remember one particular priest, a friend of mine who I knew who was involved in one particular case, and it was a girl, a professional girl, young, who came with her mother, and there were four men, kind of rugby types, to hold her down in the chair, such strength she had.

“The priest had warned the four guys beforehand: just make sure you’ve gone to Confession and one guy didn’t go to Confession, one of the four, and the girl with a voice that wasn’t hers, it was a male voice coming out of her, actually called out the sins of your man, the guy who hadn’t gone to Confession,” the bishop said.

“I’m sorry if I’m scaring anybody.”