A teacher's take on Budget 2019: Nothing to bridge pay gaps

My budget: Education spending increase only keeping up with increase in student numbers, he argues 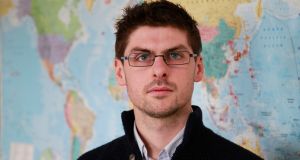 David Waters (30) a secondary teacher in Greenhills, west Dublin, believes he will be €5 better off after the Budget. However, he would prefer to be earning the same as his colleagues.

Employed after 2011, he is on a lower pay scale than colleagues recruited earlier, which creates “laughable” outcomes on days when when, as sometimes happens, pupils have more than one teacher in the room.

“I don’t expect to get back the tens of thousands of euro I have lost in the intervening years, but I would like to be paid the same as my colleagues for doing the same job.

“If I am in the room with another teacher in a team, I could be earning €5,000-€6,000 less than my colleague” he said, though he knew that pay was not going to be addressed in the budget.

The “refusal” of the Government to sanction pay equality was already known, so he was not that interested in Minister for Finance Paschal Donohoe’s budget speech. “I looked at the main bits online,” he said.

Noting the extra education funding that will see the recruitment of 1,300 extra teachers, Mr Waters said it would merely cover rising student numbers rather than bringing about an increase in spending on each student.

Overall, he said the budget had failed to arouse his interest as it was not addressing the pay issue, which he had been working on for years. “I’m sick working on it,” he said.

Mr Waters does not smoke, so he is not affected by the 50 cent increase, but he does drive a diesel car. The 1 per cent vehicle registrations tax surcharge imposed on new diesels will delay changing it.

The continuation of incentives for electric cars, and new ones for gas-powered vehicles, are not enough to encourage him to change. “It is an expensive thing to change, so I think I’ll probably stay with my diesel,” he said.