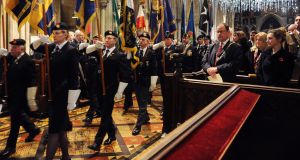 Members of the Royal British Legion’s Republic of Ireland branch parade their colours before the start of the Armistice Commemoration in St Patrick’sCathedral Dublin. Photograph: Aidan Crawle

For generations St Patrick’s Cathedral in Dublin was a place of remembrance for the Irish who died in the first World War when the rest of the country preferred to forget.

The annual Remembrance Day ceremony took on a special provenence this year coinciding with the centenary of the Armistice.

There was standing room only inside the cathedral with evensong taking place under a canopy of ‘leaves’ - each one representing one of the estimated 36,000 Irish who died in the first World War.

These leaves are composed of messages that had been left under the Tree of Remembrance, a sculpture resembling a blasted tree from no man’s land on which the public were invited to write a message for a loved one who had died.

More than 220,000 have been collected to date, roughly coinciding with the number of Irish who served in the first World War.

Each of these leaves represented a “torrent of tears from the heavens”, the Dean of St Patrick’s Cathedral in Armagh Rev Gregory Dunstan told the congregation which included Minister for Finance Paschal Donohoe, Fianna Fáil leader Michéal Martin and the ambassadors of Britain and Germany.

Dean Dunstan recalled that his great uncle Fred Orchard died on the first day of the Battle of Passchendaele on the same day and in the same place as the poet Francis Ledwidge.

Orchard’s father only found out four days after the armistice that he was no longer alive. His father’s agony had been replicated in homes across Europe.

Dean Dunstan praised the “generosity and inclusiveness” of the last four years which he said had seen the “recovered memory” of those who died in the war.

At the same time, Irish people honoured “ those whose courage and sacrifice are in the title deeds of the State”, he said.

Later, many in the congregation went to Grangegorman military cemetery for a sundown service to mark the centenary of Armistice Day.

Tea lights were placed on each of the 623 graves of those who were killed in the war and are in buried in the cemetery.

Relatives of Company Sergeant Martin Doyle placed a light on his grave. He won the Victoria Cross in September 1918, but later joined the IRA. A paving stone was earlier in the day unveiled in his honour in Glasnevin Cemetery along with those of four other Irish VC recipients.