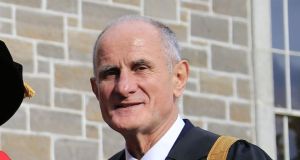 Dr Martin McAleese is noted as having asked whether DCU “had considered the option of constructing prefabricated units” to house students on campus. File photograph: Nick Bradshaw

Dr McAleese raised the idea at a governing authority meeting last year in response to the “acute shortage of student accommodation,” according to minutes.

Minutes of the meeting were released to The Irish Times following a Freedom of Information request.

Dr McAleese is noted as having asked “if the university had considered the option of constructing prefabricated units” to house students on campus.

Responding to the suggestion, Dr Declan Raftery, chief operations officer, said the college had “looked at modular build options in the UK” for student housing.

However, he said “it would appear that there was limited, if any, savings in terms of time to delivery and costs associated with this approach at present.”

The lifespan of rapid-build modular student accommodation beyond 10 years was “not proven,” Dr Raftery said, according to the minutes.

Concerns over the longevity of the accommodation “may give rise to challenges in getting long-term loan finance for such an approach,” he said.

Dr McAleese, a former Senator, was re-appointed for a second five-year term as chancellor of DCU in 2016. Dr McAleese also chairs the college governing authority, a high-level committee that meets several times a year.

During the meeting, Dr Raftery said the university had met a number of private student accommodation developers “to explore potential opportunities” for projects. College officials had also met the Ireland Strategic Investment Fund “to discuss how these additional projects could be financed,” the minutes noted.

The meeting discussed the rates charged in private student housing developments near the north Dublin campus, and if university officials could lobby private operators over rents.

Ciaran McGivern, director of finance, said that due to “current high-demand market conditions, private developers can set their own prices with little or no incentive for them to work with the university”.

In April, DCU students protested over rent increases of nearly 30 per cent at Shanowen Square, a privately-run student accommodation complex, located near the Glasnevin campus.

Student accommodation is not covered by annual rent caps of 4 per cent in designated pressure zones, because student housing operates on “licence to reside” agreements, rather than tenancy leases.

A spokesman for DCU said the university had “evaluated all options” for student accommodation.

The university had plans to add an extra 1,000 beds at its campus in Glasnevin. Currently the university has 1,400 student beds, across its Glasnevin, St Patrick’s, and All Hallows campuses.

DCU is “acutely conscious of the challenges facing students to source affordable accommodation during this period of unprecedented demand,” the spokesman said.

Craig McHugh, DCU student union education officer, said “affordability” was the main concern of students around new housing. “It doesn’t matter so much about the appearance, or if it if prehabs, what students need is quality and affordable accommodation,” he said.