Peace ‘means coming out of our own trenches; building bridges, not parapets’, Eamon Martin says 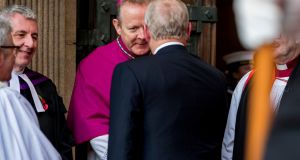 Britain’s Prince Andrew, the Duke of York (right) is greeted by Archbishop Eamon Martin before a Service of Remembrance at St Anne’s Cathedral in Belfast, on the 100th anniversary of the signing of the Armistice. Photograph: Liam McBurney/PA Wire

The fact that Irish Catholics and Protestants fought and died, side by side, in World War I was neglected for too long by all sides, north and south of the border, Catholic Primate Archbishop Eamon Martin has said. “People preferred to cling on to a history of difference and separation, rather than recognise and embrace our shared story of common suffering,” he said.

He was speaking at the World War I Commemorative Service in the Church of Ireland St Anne’s Cathedral, Belfast, this afternoon. It was the first time a Catholic primate has delivered the sermon at the event. The event was also attended by Britain’s Prince Andrew, the Duke of York.

“Earlier this year I was honoured to lay a wreath during the Last Post ceremony at the Menin Gate in Ypres with my friend (Church of Ireland Primate) Archbishop Richard Clarke and some of our young people. It was deeply moving for all of us,” he said.

He also recalled how on a visit to Ypres in 2016 “I found the spot about five miles outside the town where my great uncle Edward is buried in Canada Farm cemetery. Because he was tall and strong from working on the farm in Donegal, they put him to operate the heavy guns of war.

“Today he lies, in Flanders fields, another young man among the half a million who perished in the infamous battle of Passchendaele.”

The Archbishop recalled launcing how last month in Rome he launched a new film about Fr Willie Doyle, chaplain to the Royal Dublin Fusiliers, also killed at Passchendaele. “Fr Doyle’s body was never found. His name is inscribed at Tyne Cot (Commonwealth War Graves Cemetery) with so many other brave and heroic people from north, south, east and west,” he said.

Visits “in recent years to the Somme and to Flanders, with Archbishop Richard and the other Church leaders, have really opened my eyes to the grief and suffering that was shared by families of all traditions and from every part of Ireland,” he said.

“The brave people we are remembering are calling us to recognise their shared suffering by building a better future where difference is accepted and respected,” he said.

In indirect reference to the ongoing stalemate at Stormont, he asked “can we learn from their shared sacrifice, a full century after the so-called ‘war to end all wars’?”

Peace was not merely ‘ceasefire’ or the absence of violence and war, it was “an ongoing work of reconciliation, justice and hope: it means coming out of our own trenches; building bridges, not parapets.”