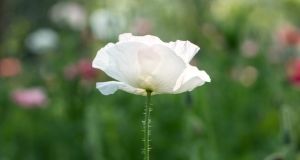 “The white poppy is a statement of peace as opposed to the red poppy which has become embroiled in UK politics,” the Quakers said. Photograph: iStock

Dublin Quakers have hailed the public response to their invitation to join them in making white poppies as an art installation on Armistice Day.

”The response has been extraordinary,” said Seán McCrum, convenor of the Dublin Quaker Peace Committee, at the installation marquee in Merrion Square this afternoon. “We’ve had well over 200 people making poppies so far.”

They were focusing on the white poppy “very definitely because it focuses on individuals, it doesn’t focus on governments or politicians or generals,” he said. “We felt that we should come up with an event that would commemorate Armistice Day 1918 in a way that would make it very clear we are commemorating all of the individuals who suffered whether they were military or civilians. And it was very important civilians be remembered because they are totally forgotten about,” he said.

“The white poppy is a statement of peace as opposed to the red poppy which has become embroiled in UK politics,” he said.

Further, he added, “we would want this whole thing to be put in the context of the European Union’s extraordinary achievement in that it is has been the first 75 years without a major European war since the second century AD and the Roman Empire. We want to help give focus to that success.”

It was the second time for Dublin Quakers to host such an event. “The first in 2016 had a similar event to commemorate the last day of the Somme where so many Irish people were lost.”

It was also about commemorating “the individuals who were killed or suffered”, he said.

“Quakers do not have a creed but we do have testimonies that are central to our thinking – testimonies of peace, simplicity, equality, integrity and community.

“The following statement was made in 1661 by early Quakers and we believe it is as valid now as it was then: ‘We utterly deny all outward wars and strife and fighting with outward weapons, for any end or any pretence whatsoever.’”