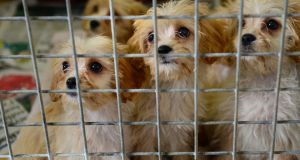 New animal welfare guidelines are set to be introduced in Ireland from next year. Photograph: Dara Mac Donaill / The Irish Times

Ireland’s reputation as the “puppy farm capital of Europe” and the alleged puppy smuggling trade from the State has contributed to proposed UK animal welfare legislation, it has been claimed.

British secretary of state for environment and rural affairs Michael Gove has pledged to introduce legislation to ban third-party sales of dogs and cats, including petshop purchases, and allow such sales only from a legitimate breeder or a pet-homing charity.

New animal welfare guidelines are set to be introduced in Ireland from next year but Mr Broughan said there was a lack of enforcement and not enough inspections of dog breeding establishments.

Figures released by Minister of State for Rural Affairs Sean Canney show there were 258 registered dog breeding establishments last year, up by 10 from the previous year. These are “premises with six or more bitches over six months old and capable of being used for breeding purposes”.

Mr Canney said in the Dáil that 275 inspections were carried out last year, compared to 250 the previous year.

The Minister said local authorities were responsible for operational activities, including enforcement and issued improvement or closure notices.

He said they also work closely with the Department of Agriculture which had responsibility for enforcement of animal welfare standards.