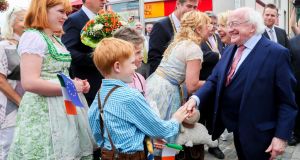 President Michael D Higgins and Sabina Higgins in Würzburg on the third day of an official state visit to Germany. Photograph: Maxwell

This weekend the German city of Würzburg comes to a joyous standstill, celebrating its Catholic heritage, the Cavan man they have to thank for it – and raising a glass or three to his homeland.

It’s not St Patrick’s Day again but the Kilian festival, starting with a parade of local clubs and guilds in traditional dress through the cobbled streets of the capital of Franconia, the northernmost corner of Bavaria.

On Sunday, Archbishop Franz Jung will lead a second procession with the priceless relics of Kilian, the religious man beheaded here in 689 for crossing the local duke’s wife.

Thankfully, 1,330 year later, no one is bearing any grudges. Mayor Christian Schuchardt welcomed President Michael D Higgins to “what is regarded as ‘the’ Irish city on the European mainland”.

Kilian is evident everywhere here: as a local popular name, a bakery chain and in his Bible, a treasure of the university library, which contains the oldest known written examples of old Irish.

Würzburg’s celebration of its beloved patron saint is just one of countless examples of affection for our country in Germany that often go under the radar at home – but things are changing.

When the official delegation arrived in Würzburg on Friday, greeted by Tricolour-waving children and a beaming brass band, they were not the only Irish in town. Two travel groups – from Kilian’s native Cavan and the Würzburg’s twin region of Bray and Co Wicklow – were already in party mode. Some are Würzburg veterans, others were here for the first time.

“I just arrived this morning and am totally mesmerised by the beauty and the hospitality, I didn’t expect this,” said Pauline Silke from Greystones, finishing off a schnitzel and a cool glass of German Silvaner wine in a balmy courtyard.

Tara Baynes, a 23-year-old from Castlebar has moved back to Würzburg for a year after studying here because she loves the German language and this corner of the world.

“People are so nice here and they get so enthusiastic about the Irish, but we need to break down stereotypes at home,” she said.

The best antidote to stereotypes is exchange - and those between Würzburg, Wicklow and Cavan are a regular, relaxed and warm people-to-people affair.

“We work hard to keep things up,” said Matthias Fleckenstein, head of the local German-Irish Society. The foundation of their connection is four twinned schools each on the Irish and German side, but it contributes whiskey tastings and walks in honour of playwright John Millington Synge, who studied in Würzburg in 1894. “The point,” said Mr Fleckenstein, “is to get people to relate to each other and keep up contact.”

These people in German and Ireland, motivated by mutual curiosity and admiration, are already showing where the official bilateral relationship needs to be.

This week, official Germany noticed Mr Higgins and Mr Coveney were here – and how much time they brought with them – as did the wider country thanks to newspaper articles and state broadcaster reports.

The challenge now – as Ireland pushes for a wider, deeper relationship with its largest EU partner – is to maintain and expand contacts, old and new, made in the last three days.

Throughout the visit Mr Higgins was at pains to highlight the history and maturity of the German-Irish relationship: in religion, arts and sciences. Decade-old bailout tensions pale in comparison to that – and the untapped potential of the bilateral relationship, forced by Brexit onto the agenda.

“While we speak a different language, we share values and principles which allow us to speak with a resonance and respect,” Mr Higgins told a state dinner in Bellevue Palace on Wednesday, “not only on the fundamentals we agree but on the nuanced differences we can equally discuss.”

Discussions, at every political level, have never been so intense between the two countries.

State agencies are firing on all cylinders, the Irish embassy in Berlin has its largest-ever staff and, in New York’s UN headquarters, the Irish and German delegations are working closely to advance projects to defend the body’s multilateral DNA from attack.

From Berlin’s end, this visit was a concerted effort to help Ireland over its Brexit abandonment issues by reiterating the same message, over and over in countless iterations: Berlin is at Dublin’s side on its bumpy Brexit journey.

The second, soft-diplomacy priority: to communicate, gently yet firmly, Germany’s deep positive regard for Ireland.

All going well, Mr Steinmeier is planning a return visit next year to mark the 30th anniversary. Such a quick return visit would be another diplomatic coup. Another was having both presidents attend Thursday evening’s Other Voices concert where Philip King and his Irish musical guests lifted the visit on to another level.

“If the sense of a state visit is to strengthen . . . the bonds between two countries and the people, I think your mission is accomplished,” said a beaming Mr Steinmeier from the Berlin stage, before revealing a shocking secret: “I was listening to Rory Gallagher in the 1970s.”

As the official visitors left from Würzburg, the Irish visitors remained. Wicklow man Charles Egan said the time had come for people in Ireland to realise Germany is “more than motorways and Mercedes Benz”.

“They don’t realise how it really is,” he says, warming to his theme. “If people would only understand the word Gemütlich” – perhaps the most uniquely, untranslatable German word that roughly means cosy – “then they would understand the real Germany.”