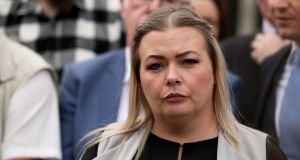 Tracey Mulholland, whose grandfather was murdered by the Glenanne gang, speaks to media outside the Belfast High Court. Photograph: Brian Lawless/PA Wire 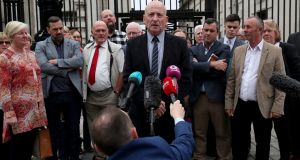 Edward Barnard, whose brother Patrick was murdered by the Glenanne gang, speaks to media outside the Belfast High Court . Photograph: Brian Lawless/PA Wire

The Police Service of Northern Ireland (PSNI) chief constable has been ordered to conduct an independent inquiry into alleged state collusion with a loyalist murder gang blamed for more than 120 murders.

At the Court of Appeal in Belfast, Lord Chief Justice Sir Declan Morgan rejected an appeal by former PSNI chief Sir George Hamilton against a 2017 judgment that the police’s failure to conduct an overarching examination of state collusion with the Glenanne Gang was inconsistent with its human rights obligations.

The gang was a unit of the Ulster Volunteer Force (UVF) that counted rogue security force personnel among its members. Operating mostly in Tyrone and Armagh, the gang has been blamed for about 130 sectarian murders during the 1970s and 1980s.

There was standing room only in court as families of those killed filled the public gallery and lined the aisles for the proceedings. Outside the court, supporters, including other bereaved families held banners in solidarity.

Sir Declan said the court would not direct Chief Constable Simon Byrne on how the independent officers should proceed but he warned that if there are any unduly delays in appointing the officers, he would be at risk of further proceedings challenging such a failure.

The independent Historic Enquiries Team (HET) had partially completed an inquiry into the activities of the Glenanne Gang before its work was halted by PSNI commanders. The HET had examined individual murders committed by the gang but had not undertaken an overarching review of the collusion allegations.

The PSNI’s decision to stop the HET review was challenged by way of judicial review by the family of one of the gang’s victims, Edward Barnard, whose brother Patrick (13) was killed by the gang in Dungannon in 1976.

Outside court, he welcomed the judgment, though he noted that 20 relatives of Glenanne victims had died since the initial judicial review proceedings commenced in 2015. He claimed the police had treated the families like a form of “pestilence”.

“For the families here today we will keep on fighting for the truth for our dead relatives, because with the truth we honour them,” he said.

Darragh Mcking, lawyer for the Barnard family, said it was a “momentous day” for the Glenanne families.

“It has been a long, long road to get to this day but thanks to publications, documentaries and now court judgments these families have been exonerated, they have been vindicated, the court has told us today what we always knew — that there was a state policy of collusion relating to the Glenanne series,” he said.

“The time has now come for justice for the Glenanne families and what we now do is we call urgently upon the new chief constable to learn from the mistakes of the previous chief constable and ensure this investigation begins expeditiously...These families have waited long enough for the truth and it’s now time that truth and justice was publicly reported in a public document with the police signature at the top of it.”

Tracey Mulholland, whose grandfather Arthur Mulholland was killed in 1975, said: “Let this begin now, as the judges have ruled, let it begin immediately, so that we don’t lose any more of our people.

“This isn’t going away — there are grandchildren coming down the line and this will go on. We will fight and we will remain strong so that truth and justice can be given to these families.”

Ms Mulholland and other relatives criticised Sir George for not attending the court hearings in person. – PA