‘Someone knows something’: Cameron Reilly greatly missed in Dunleer 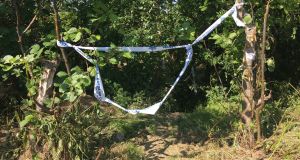 Garda scene of crime tape at the entrance to the thicket near where the body of CameronReilly (18) was found in Dunleer, Co Louth, on Saturday morning, May 26th 2018. Photograph: Peter Murtagh 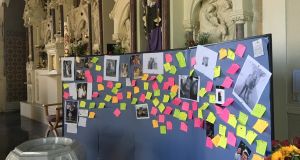 A shrine of messages inside St Brigid’s Church in Dunleer, Co Louth, in memory of 18-year-old Cameron Reilly whose body was found in a field nesr the town on Saturday morning, May 26th 2018. Photograph: Peter Murtagh

A shrine of photographs and about 100 pink and yellow post-it stickers inside the pretty church of St Brigid in Dunleer, Co Louth, tells its own story about Cameron Reilly.

They are displayed on screens behind the baptismal font, beside the 18 candles in front of the altar, one for each year he was alive and all now spent, just like his life. They speak of a community’s sorrow and the love the young man’s friends, especially young women, had for him.

Fly high Cameron, say several of the messages; RIP say others; “words can’t describe how much I’ll miss you. Hope you get the best bed in heaven”, says another.

But several, notably from young women, speak of Cameron’s humour, how he made them laugh, and of how the shy young man with a single pierced ear lobe was a notably kind person. Women appear to have felt easy in his company, and he in theirs.

“You were the most kind and happy person I knew,” says one message. “You are the funniest person I’ve ever meet [sic]. I’m glad I got to be friends with you.”

The expressions of sorrow and love were put there on Monday night when the community, including Cameron’s grandparents, Joe and Rita Glass, with whom he lived, gathered to mourn collectively.

The church backs onto Beechwood Drive, an estate of five roads all carrying the same name, where Cameron and the Glasses lived.

Beechwood itself backs onto Shamrock Grove, a small estate of like character that runs up the side of the Glen Dimplex factory where electric showers and blow heaters are made.

Behind the factory is a field that runs up the side of Shamrock Grove and comes to a halt at a third estate, Rivervale, whose homes are slightly newer than the other two estates and slightly more prosperous looking.

The top of the field is marked by dense vegetation - thickets of willow and gorse and brambles - that make up the field’s boundary, on the other side of which is a tongue of grassy open space, a sort of green buffer between Rivervale and the other two estates.

Chez (24) lives in Shamrock Grove. Everyone knows his other name so he doesn’t give it. He knew Cameron.

Chez had no idea what happened to the first year Dundalk Institute of Technology hospitality student “but someone does,” he added.

There is no sign of anti-social behaviour in any of the three estates - no litter, no graffiti, nothing broken or burnt out and abandoned.

In Beechwood, a large green open space at the centre of the estate immediately behind St Brigid’s has a well-used playground with swings, a zip wire, see-saw and climbing frames.

“That field,” she said, “there would be a lot of social drinking there. . . It’s just a place where people gather but it doesn’t have a reputation for trouble.”

Trouble came on Friday night and Saturday morning, however.

There were up to 20 youngsters, late teenagers, drinking beer and chatting in the thicket at the top of the field beside the tongue of grass running along the side of Riverdale. Among them were Adam Power (20) and Jake Carroll (17), who live in Riverdale.

According to Adam, speaking on Tuesday, he and Jake and a third friend left the group at about midnight and went home. They had drunk beer; there was no drug taking, they said. There had been music, dance music, and Cameron had danced.

Sometime later, some of those who had remained, including Cameron, walked down through one or other of the other two estates, down to the Ardee Road and into Dunleer, to Enzio’s chipper and pizza take-away.

“Whatever happened next, that’s what we don’t know,” Adam said.

Among young people in the town, there is talk of a fracas outside the chipper, or of something being said in the field. Whatever happened, Cameron was assaulted, bashed about, and strangled, his body left in the field to be found on Saturday morning.

“You don’t know what to be thinking about what happened,” says Jake. “Someone knows something.”

And that is very much the garda view too: someone in the community, someone who was there knows what happened and how a fundamentally shy, gentle young man who, according to Adam and Jake, was nonetheless laughing and dancing before midnight, was dead before dawn.

In sunshine on Tuesday, gardaí with slash hooks and a small chain saw were cutting back the thicket, making sure that nothing of evidential significance was being left behind. Colleagues were asking everyone to keep a look out for Cameron’s’s missing mobile phone, and officers were making door-to-door inquiries in Riverdale hoping a resident, someone overlooking the open space and across to the thicket at the top of the field, saw something.

“He was a lovely chap and a good friend,” Adam said as he and friends hung around in the sunshine. “He was big into parties and music and loved going to concerts.”

Jake is troubled that someone, maybe more than one person, among his friends known what happened and isn’t saying. “I don’t want to believe it, like,” he said.

Funeral arrangements have yet to be announced but Cameron’s photograph, showing a well-dressed young man in a jacket and tie with a big smile on his face, looks out from the altar of St Brigid’s.

Say not in grief ‘they are no more’,” says a sign above it, “But live in thankfulness that they were.”