Two men arrested in connection with 1990 murder of Dessie Fox 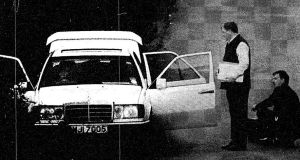 Picture of Dessie Fox’s car at the scene of the murder in Prosperous, Co Kildare, from the front page of the Irish Times on October 1st, 1990. Photograph: Eamon Farrell

Gardaí have arrested two men as part of an investigation into the murder of bookmaker Dessie Fox in 1990, the first movement in the case in 26 years.

Sources said one of the men was arrested for Fox’s murder while the other was arrested for unlawful possession of firearms relating to the incident. The two are believed to have been connected to the Irish National Liberation Army (INLA) at the time.

Fox, one of the country’s most successful on-course racing bookmakers, was driving from his home in Dungannon, Co Tyrone, to a race meeting at the Curragh when his car was intercepted by a number of armed men at Healy’s Bridge, Prosperous in Co Kildare on September 30th, 1990.

The father of three sustained a gunshot wound to his right thigh during the incident and died at the scene. There were also a number of gunshots to the car.

A black leather briefcase containing a large quantity of cash was stolen from Fox’s car, along with a canvas money bag, billheads with name, a portable car phone and car keys. The canvas bag and car phone were later recovered.

The man suspected of murder was taken from Cloverhill Prison to Leixlip Garda station on Tuesday for questioning.

The arrests bring to 19 the number of people detained over the years in relation to the murder. All of the previous arrests came in the first year after the murder. To date nobody has been charged.

Sources say the catalyst for the latest arrests was an accumulation of information over the years rather than a single break-through.

The two arrested men, aged 50 and 61, were detained under Section 30 of the Offences against the State Act, 1939 at Naas and Leixlip Garda stations.

Fox, a 47-year-old former teacher, was no stranger to robbery attempts and was known to travel with large quantities of cash. He regularly switched cars and altered his routes of travel to avoid such encounters.

On the 20th anniversary of his killing, his daughter Lorna Fox O’Mahony made an appeal and spoke warmly of a loving father who had been taken from his happy family.

Garda cold case officers who had been looking into the shooting had hoped that some of the wives or girlfriends of those involved had become aware of their partners’ involvement and may have felt compelled to come forward with information.

“We’ve got a very experienced and well-equipped serious crime review team who look at these cases and assist local investigators in the context of developments. And these developments come from scientific developments but often also from members of the community who may remember something, recall something or maybe have a change of mind in relation to co-operating with gardaí.

“I would like to appeal again to the public in the context of that particular investigation for whatever information people might have at this remove which might help us to move this on to get to a successful conclusion.

“We are determined to ensure that all these cases that remain unsolved get the proper review over time.

Investigating gardaí continue to appeal for information in the near 28-year-old case. Gardaí believe there are people with crucial information that may now be in a position to come forward.