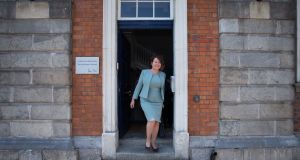 Former Garda commissioner Noirin O’Sullvan has told the Charleton Tribunal she could not recall sexual allegations against Garda whistleblower Sgt Maurice McCabe being discussed in her presence until the O’Higgins Commission got underway in late 2014.

She also told the tribunal she had never seen a file containing a false grievous sexual allegation against Sgt McCabe which was submitted to her office when she was Garda commissioner in 2014.

Ms O’Sullivan, who resigned last year, was responding to allegations made by Supt Taylor of a smear campaign against Garda whistleblower Sgt Maurice McCabe. She has denied the allegations.

Ms O’Sullivan was asked by tribunal counsel Kathleen Leader about her knowledge of discussions involving former Garda commissioner Martin Callinan relating to historical allegations made in 2007 by a Miss D that Sgt McCabe had sexually assaulted her (Miss D) almost a decade earlier, when she was a child.

The Director of Public Prosecutions directed in 2007 there should be no prosecution as there was no evidence an offence had taken place, and if anything occurred, it amounted to nothing more than horseplay.

In a major error by Tusla in 2014, other very serious sexual allegations were wrongly made against Sgt McCabe as part of the Miss D case. It took a long period of time for that error to be corrected.

Asked about her knowledge of these matters during her time as deputy commissioner, Ms O’Sullivan told the tribunal she had no memory or recollection of hearing it from the time she dealt with it as an assistant commissioner in 2008 to the beginning of the O’Higgins Commission inquiry in 2014.

In 2008, she had reviewed a file on a complaint made by Sgt McCabe about alleged Garda malpractice in Cavan, which referred to the Miss D case.

Ms Leader brought her through a series of hand-written notes from management meetings at a time when Ms O’Sullivan was deputy commissioner.

“I have read the evidence and seen the notes and I don’t remember the D allegations were ever mentioned at those meeting in my presence,” she said.

Later, Ms Leader directed her to correspondence received in her office, when she was commissioner, about Sergeant McCabe: an attachment which included reference to the details of the false allegations wrongly ascribed to the whistleblower.

The private secretary in her office, Supt Frank Walsh has previously given evidence to the tribunal that he showed the file to the then commissioner and had given her a brief summary, including a mention of the serious sexual allegation.

Ms O’Sullivan said she had no recollection of seeing it.

“I am very conscious that if I had seen a document like this and read it in its entirety and I would have been aware from my reading of it and experience from 2008 that there was a different synopsis of events.”

Asked why the Tusla notification in relation to Miss D was not brought to her attention by the assistant commissioner dealing with it, she said he had never mentioned it to her and she was not aware of those false allegations.

She did not agree with Ms Leader when she said there was a bit of a theme emerging where everything related to the Miss D case was wiped from memory.

The tribunal was also shown records of phone contact with journalist Paul Williams ahead of interview he conducted with Miss D in May 2014. Ms O’Sullivan said she had never spoken or communicated to Mr Williams about the Miss D case.