President says North must move out of ‘hard shoulder’ 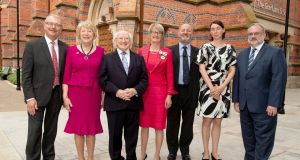 President Michael D Higgins has urged Britain and Ireland to move the Belfast Agreement “away from the hard shoulder”.

Mr Higgins said challenges facing society demand action from the “public realm” in Britain and Ireland, “which the Good Friday Agreement has, uniquely, created for this whole island”.

He was speaking at the annual Harri Holkeri lecture on Tuesday, marking the Belfast Agreement’s 20th anniversary. The lecture, named after the late Finnish prime minister who supported the peace process, was held in Queen’s University Belfast.

The President quoted DUP leader Arlene Foster in his lecture where he explored themes including peace and reconciliation, as well as Brexit, the North being without a government, and the challenges facing society.

“That is why it is now important and urgent to find a way, in Dublin and London, but above all here in Northern Ireland, to move away from the hard shoulder where the implementation of the Good Friday Agreement presently finds itself and to start moving together again along our shared journey, and to do so with generosity.

“Arlene Foster has, I believe, recognised this in her statement that ‘given the size of Northern Ireland and the scale of challenges we face, we will only succeed if we move forward together’.”

Speaking afterwards Mr Higgins said he was disappointed the Irish language has become a “tense” issue in Northern Ireland.

“I don’t understand it at all, frankly,” he said.

He said language no more belongs to any one group “than the mountains belong to any of us” and it would be wrong if it was abused by anyone as “an instrument to damage the entire process”.

“People just need to inhale deeply and concentrate, in many cases on putting as many positives into the atmosphere as we can,” he said.

During a questions and answers session at Queen’s, the President congratulated a young man who asked what lies ahead for the LGBT community and women in Northern Ireland following the recent referendums in Ireland, for having “the nerve to ask me a question that could get me into constitutional difficulty”.

At present Northern Ireland is the only part of Britain and Ireland that has not extended civil marriage rights to LGBT couples.

The same will apply to access to abortion following the introduction of new laws in the Republic.

Mr Higgins said it had long been his view that matters around sexuality are “issues of right”.

On the role of women he said: “We have to get our gender issues rights.”

He spoke of the importance of “adequate, careful and thoughtful sex education”, so that people of all genders and fluid genders can look forward to living their lives.

“For goodness sake that is not revolutionary,” he said.

He reflected on what had been done to the lives of the LGBT people who left Ireland at a time when homosexuality was illegal and that saying “that was the way we were then” could not justify it.

“The fact of the matter is we can be decent people treating and respecting each other’s rights this minute if we feel like it.”

He was not impressed with the United Nations’ ambition of 2030 as a target for the eradication of violence against women and girls.

“I think we shouldn’t have to wait an hour for that, not speaking of a decade and a half,” he said.