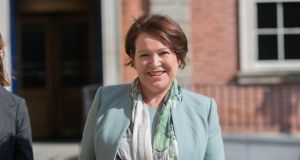 The chairman of the Charleton Tribunal has criticised Garda whistleblower Supt Dave Taylor’s withdrawal of almost all the allegations he made against former Garda commissioner Nóirín O’Sullivan, saying she “had to leave her job” because of his claims.

Mr Justice Peter Charleton listed the allegations about Ms O’Sullivan’s alleged role in a smear campaign against Sgt Maurice McCabe that have now been withdrawn by Supt Taylor, the former head of the Garda press office.

He also listed allegations Supt Taylor made of a trumped-up criminal investigation against him.

Mr Justice Charleton told Mr Taylor’s counsel on Tuesday that the allegations had been made on oath in the High Court, had been passed on to public representatives and had been heard by the “entire people of Ireland”.

“The commissioner (Ms O’Sullivan) had to leave office in relation to these events,” he told Mr Taylor’s counsel Michael O’Higgins, questioning if such claims could be made without any comeback whatsoever.

The tribunal is investigating claims of a smear campaign against Garda whistleblower Sgt McCabe, directed by the then garda commissioner Martin Callinan with the full knowledge of his then deputy, Ms O’Sullivan. Both have strongly denied the allegations.

Mr Justice Charleton’s intervention came at the end of Mr O’Higgins’ questioning of Ms O’Sullivan. She denied Mr Taylor’s claim that she was orally informed on an ongoing basis about an alleged strategy to brief negatively about Sgt McCabe.

Mr O’Higgins had said that all allegations about Ms O’Sullivan being kept informed of the strategy by text message were being withdrawn. The former commissioner said she was now “confused” as to what exact case Mr Taylor was making against her.

Mr Justice Charleton said Supt Taylor now accepted that a criminal investigation of him was valid and he was no longer making the case that the former commissioner’s husband, a senior office in the force, was added to the investigation team for the purposes of fixing a charge.

Mr Justice Charleton asked if all the allegations made on oath in the High Court, or in public, or through public representatives, were now being withdrawn.

Ms O’Sullivan told the inquiry she moved Supt Taylor from the press office to the traffic division at the earliest opportunity to transfer him.

“I did not trust Supt Taylor and did not feel comfortable in his company,” she said. “The position of press officer is somebody I would have to have close day to day relations with and I would have to implicitly trust them.”

Mr Justice Charleton said Supt Taylor could clearly not stand Ms O’Sullivan and perhaps she could not stand him.

In another intervention, the chairman told Ms O’Sullivan the plain reality was “you did not trust him. The person who is representing you is someone who you can’t trust. It is very important that there is somebody three you can trust...and you put that in place.”