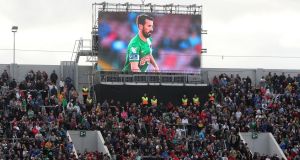 It may not have set hearts racing but the Liam Miller Benefit Match did exactly what it set out to do.

Nearly 43,000 fans turned out to pay a warm tribute to the late Republic of Ireland soccer player at Páirc Uí Chaoimh in Cork, and the fixture raised valuable funds for his widow Clare and children – Kory, Leo and Belle.

After Miller (36), who played for Celtic, Manchester Utd and Cork City FC during his career, died in February of cancer, his neighbour, property developer Michael O’Flynn, came up with the idea of holding a benefit game.

The idea became a reality on Tuesday when Keane and former Celtic captain Paul Lambert, with Miller’s sons Kory and Leo as mascots, led out the sides for the first ever soccer match at the recently redeveloped Páirc Uí Chaoimh. 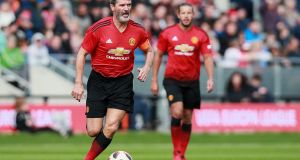 Michael D Higgins, just a month out from the presidential election, was introduced to the two teams by O’Flynn, before the Barrack Street Band and tenor Darragh McGann launched into Amhrán na bhFiann.

The game itself provided some end-to-end entertainment but at a much more pedestrian pace than what regular visitors to Páirc Uí Chaiomh would be used to. This was a long way from the summer hurling clash between Cork and Limerick here.

A penalty dispatched by Corkman Denis Irwin, and a goal by Louis Saha had given the Manchester Utd Legends a two-goal advantage before Ireland’s record international goalscorer, Robbie Keane, showed some sharpness by nicking a goal just before half-time to leave it at 2-1.

Martin O’Neill, who was managing the trailing side, made wholesale changes for the second half and among those to come on was Miller’s close friend and fellow Corkman, Colin Healy, who scored an equaliser with 10 minutes to go.

Arguably the biggest cheer of the afternoon came when Roy Keane, sporting grey hair and a grizzly beard, put himself on for the United side for the final 25 minutes. The stadium, where he once competed in a schools’ athletics meeting, erupted with chants of “Keano, Keano, Keano”.

With the Celtic/Ireland pressing strongly in the closing 10 minutes as the older Man Utd players seemed to tire, it fell to their guest keeper, Mark McNulty of Cork City, to pull off some fine saves to ensure the fans got some drama in the shape of a penalty shootout.

The game meant it was a special day for Cork, but the real winner proved to be Dublin, more precisely United substitute Dion Dublin, who slotted home his side’s final penalty to secure a 3-2 victory for Keane over his boss O’Neill.

O’Flynn expressed his gratitude to all those involved including the players and managers, the GAA for making the stadium available, and sports fans from Cork and beyond who turned out in good numbers to support the cause.

“I’m absolutely delighted – what a fantastic day in Cork and for Cork – it’s been a huge success for all involved,” he said.