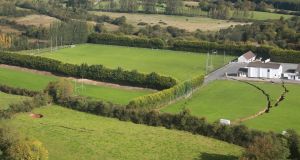 The sinkholes that appeared near Magheracloone Community Centre just outside Carrickmacross, Co Monaghan, after an old mine shaft collapsed. Photograph: Pat Byrne

Five homes are being surveyed to see if they are in danger following the collapse of an old mine shaft in Co Monaghan on Monday, which led to the creation of two more sinkholes yesterday.

Gyproc, the company that owns the disused mine, said geological experts were still examining the sinkholes, but they hoped to have a preliminary report ready by Wednesday evening.

“Having to leave your house at short notice without any of the necessities you need, I am sure their concern is how long will they be put out but I suppose it’s better safe than sorry,” said Sinn Féin councillor Colm Carthy.

Initial tests indicate that the sinkholes, which have split a local GAA pitch, are confined within a 120m radius, though an examination of all lands within a 2km exclusion zone is under way.

Lands and properties outside the zone are unaffected by the subsidence, including Drumgossatt National School, which reopened after a precautionary evacuation on Monday.

“We will continue to liaise with local residents in the area to keep them updated, and will work with the local authorities regarding a timeline for the opening of local roads,” the company said.

Monaghan County Council, which has closed the Carrickmacross to Kingscourt road (R179) from Drumgossatt crossroads to O’Rourke’s filling station at Drummond, met the Garda and the company on Tuesday.

The LP4900 route to Drumgossatt School has also been closed to traffic. Further safety checks are needed before the roads can reopen, and this is not expected before the weekend.

The Drumgossatt mine ceased operation in 1989 and Gyproc Ireland has managed and monitored the site since. The Drummond mine in Magheracloone about 1.5km away is still used by Gyproc.