Pro-choice activism to continue in Ireland despite repeal vote 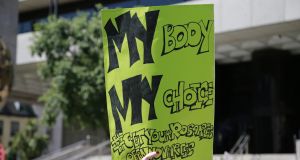 Pro-choice activism will need to continue for up to five more years to ensure all women have access to safe and legal abortion, the Abortion Rights Campaign has said. File photograph: Nic Bradshaw/The Irish Times.

Pro-choice activism will need to continue for up to five more years to ensure all women have access to safe and legal abortion, the Abortion Rights Campaign has said.

Speaking at the launch of the campaign’s seventh annual March for Choice, which will take place this Saturday, Dr Mary Favier said activists are worried about the “chilling” of abortion rights despite the vote to repeal the Eighth Amendment.

The organisers of the march say its purpose is to “honour those who have lost their lives because of the Eighth Amendment and to make a promise that we will continue to fight until abortion is made available across the island of Ireland including Northern Ireland and to those whose circumstances fall outside the remit of the proposed legislation.”

Dr Favier, who founded Doctors for Choice, said the effort to change the law accounted for 10 per cent of the work but the fight for its proper implementation will account for 90 per cent.

She said planning for abortion by the Department of Health has been “a shambles” while Independents4Change TD Clare Daly said the new regime will be implemented by a “dysfunctional” health service.

She said that while planning at GP level and in family planning clinics has been quite good, little preparation has taken place for women who will require a hospital visit to end their pregnancies.

These women will have to compete for resources with others who have had miscarriages or require gynaecological procedures.

Dr Favier said asking a country like Ireland, which previously had such a restrictive abortion regime, to discuss, educate and plan such a drastic change will be “a long journey.” She said in other countries the best results were achieved when activists stayed involved even after legalisation was brought in.

“We have to push the message out in the general public. We need to start again developing our stories, our narratives and we need to push, push, push,” she said. “We can’t probably stop pushing for at least two years but probably nearer five.”

Gearóidín McEvoy, of Lawyers for Choice, said the presence on the statute books of a 14 year maximum prison sentence for those who get an illegal abortion will have a significant chilling effect and is unduly burdensome.

The main focus of the campaign following the vote in May is now the proposed conscience clause in the forthcoming legislation, which will allow doctors to refer women elsewhere if they do not want to facilitate an abortion.

Paola Rivetti, of Migrants and Ethnic Minorities for Reproductive Justice, said in some regions of Italy, where a similar clause exists, up to 93 per cent of doctors refuse to carry out procedures.

Dr Favier said the campaign is worried doctors, especially those in Catholic owned hospitals, will refuse to carry out abortions over fears it will jeopardise their careers.

“What we don’t want is convenient objection.”

Mary Robinson says she made her biggest mistake in role over Princess Latifa 00:18
Mandatory hotel quarantine to be managed by ‘one-stop shop’ provider 00:15
Gardaí to examine medical records of suspected Cork killer 00:01
Covid-19: Self-isolation rules to be eased for healthcare workers 00:01
Deaths of three brothers near Mitchelstown investigated by gardaí 22:10