So Brexit got done. Now for the hard part: border checks

Dublin Port will be ground zero for checks on goods from Britain, but a lot remains uncertain 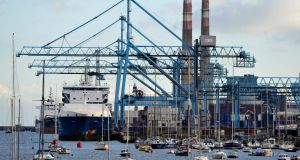 At 5.30am on New Year’s Day a handful of lorries will roll off the Irish Ferries ship Ulysses after it arrives at Dublin Port following a three-hour crossing from Holyhead in Wales.

On previous Fridays, lorries would have driven clear of the port through the Dublin Port Tunnel out onto the M50 and then towards their distribution centres and delivery destinations unimpeded.

This Friday, these arrivals will be treated very differently.

The Ulysses will be the first roll-on, roll-off ferry to cross the EU-UK border after the end of the Brexit transition period at 11pm on Thursday.

The Stena Estrid will arrive in Dublin from Holyhead at 11.45pm on Thursday, but no customs procedures will apply to British goods on board, as it departed the UK before 11pm on Thursday, and thus Brexit had yet to take effect at the time of the departure.

The Ulysses will be the first ship into Dublin with lorries falling subject to checks not seen in a generation thanks to the EU single market that made trade seamless between these islands.

State officials talk about policing the new border of the EU single market created by Britain’s exit from it, and Dublin Port is ground zero for the Republic in this regard, and will be the State’s single busiest outpost for checks and inspections when Brexit takes effect.

Nowhere else in the EU will there be the same volume of roll-on, roll-off ferry traffic subject to the scale of checking that will be required as there will be for Irish Sea road freight from Friday. It will be a huge challenge for businesses, Government departments, and State agencies and regulators.

On paper, things should run smoothly, if importers, their logistics companies and their customs agents (if they use any) have been following the advice of the Revenue Commissioners and the Department of Agriculture on preparing for customs, agricultural or food safety checks on goods arriving in from Britain.

There is an alphabet soup of acronyms covering the red tape and systems they will have to navigate to ensure lorry drivers have secured the all-important pre-board notification number (PBN) to allow them to board their ferry in Holyhead. No PBN, no ferry journey.

During the last 30 minutes of the three-hour boat journey from Holyhead, the lorry drivers will have to check their “customs channel” to find out whether they are “green routed” or “red routed” – the latter is a dreaded colour that will make lorry drivers’ journeys even longer.

If they are carrying live animals, they will be directed to the border control post at Yard 2 at Dublin Port, where Department of Agriculture inspectors will be there to check the animals.

Consignments of animal and plant products or plants could be directed for a number of checks, including physical inspections, at the Department of Agriculture inspections points at the port.

The big unknowns are: how many lorries will be subject to checks, how long will the checks take and will the checks delay ferry schedules and cause traffic to build up inside and outside the port?

The smooth operation of the EU single market since the start of 1993 means that it is not possible to answer these questions accurately. Since these lorries have never been subject to these exact kinds of checks before, it is not clear how many consignments will need to be checked.

All consignments must undergo documentary and identity checks, but for the highest-risk foods, such as poultry, milk, eggs and honey, the EU rules compel veterinary inspectors to conduct physical checks on half of all these consignments passing through Dublin Port.

Delays will depend, to a large degree, on the preparations taken by the importers themselves. If they have the paperwork in order, the goods are likely to flow more freely.

Two-thirds of agrifood and plant product consignments from “third countries” – which Britain will become on Thursday night – are currently rejected because of incorrect paperwork.

State agencies have hired 1,500 staff and Dublin Port has spent €30 million on new buildings, checkpoints and traffic layout to prepare for checks, based on existing levels of trade: 1.2 million trailers moving out of Dublin Port every year and about 410,000 trucks coming into the port.

Of those inbound trucks, about 170,000 every year have carried goods that might fall foul of the SPS checks that will be required on goods landing in from Britain from January 1st.

State officials believe that the new barriers on trade with Britain will inevitably mean reduced volumes of goods as businesses choose to avoid the bureaucratic headache of new customs procedures and securing multiple health certificates from veterinary or plant inspectors for multiple loads in single lorries.

It will simply not be economically viable to transport some plant- or animal-based food into the country if the products result in additional paperwork and delays from physical inspections.

The early days of January are expected to be quiet and an unclear gauge of how port checks might work in the long term, given the record freight volumes that moved across the Irish Sea in November and December as businesses stockpiled in advance to avoid these new border controls.

Even with the record volumes of freight that came before Christmas, traffic still flowed through Dublin Port smoothly, as the port experienced its busiest months on record.

The full pain of Brexit bureaucracy may not be felt for weeks, and truckers driving off the Ulysses on Friday may later decide that moving goods within the single market and avoiding Britain altogether, if possible, by taking direct ferries to and from mainland Europe may be a longer but easier route.

James Joyce’s line from Ulysses could make sense to Irish importers, exporters and truckers in this new, post-Brexit world: “Longest way round is the shortest way home.”