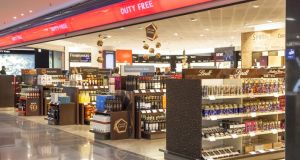 Duty-free between Ireland and Britain was abolished 21 years ago as it was not considered compatible with the emerging single market. Photograph: iStock

For the first time in more than 20 years people travelling to the State from British ports and airports will be able to load their luggage or their cars with tax-free tobacco, alcohol, perfumes and so-called luxury items once the new year bells chime in less than a week.

Duty-free between Ireland and Britain was abolished 21 years ago as it was not considered compatible with the emerging single market. However with the UK now leaving the EU and its single market from the start next year the old rules are set to revert.

Airports and ports in Ireland as well as ferry companies and airlines will be optimistic their ability to sell duty free products to passengers travelling to and from Britain will offer them a much-needed additional revenue stream as they continue to struggle with the pandemic which has been, by any measure, the single greatest crisis to hit the modern travel industry, The new duty-free rules will not, however, apply to people travelling between Northern Ireland and the Republic.

While duty free sales for passengers travelling within the EU were abolished in the late 1990s, they remained for all non-EU destinations.

Speaking this week, the Tánaiste and Minister for Enterprise Leo Varadkar said duty free would be on offer to travellers once flights resume. A ban on flights and ferries from Britain into the Republic is in place until December 31st due to a new more-contagious strain of the Covid-19 .

“There will be duty free when we can start flying again between Britain and Ireland,” Mr Varadkar said.

That does not, however, mean Irish people will have unfettered access to cheaper cigarettes and alcohol.

According to Revenue, people travelling from non-EU countries can bring in goods free of duty and tax if their combined value is no more than €430 if the passenger is 15 or over or €215 if they are under 15.

Technically, then, a family of two adults and two children returning from a weekend in the British capital could bring in a total of €1,290 as long as they could divide it up as necessary.

In addition to a duty-free allowance for general goods, travellers will have allowances for alcohol and tobacco products. Those allowance permit 200 cigarettes, 100 cigarillos, 50 cigars or 250g of smoking tobacco.

Under Revenue’s rules people will be allowed one litre of spirits or two litres of other alcoholic drinks with no more than 22 per cent alcohol . These might include port, sherry, sparkling wine and some liqueurs

Up to four litres of wine and 16 litres of beer will also be exempt from duty under the new post-Brexit rules.