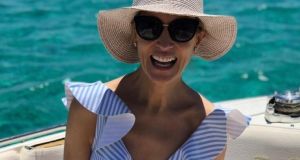 Emma McManus, daughter-in-law of JP McManus who died on Wednesday morning after falling ill in Barbados. Photograph supplied by family.

The families of former Irish tennis star and retired businessman Peter Ledbetter, and horse racing magnate JP McManus, have been rocked by the sudden death of Mr Ledbetter’s daughter Emma, who was married to Mr McManus’s son, John McManus.

Ms McManus (40) died on Wednesday morning after falling ill at a private villa on the grounds of the luxury Sandy Lane resort, Barbados, purchased in the late 1990s by JP McManus, financier Dermot Desmond, and horse breeder John Magnier.

Members of the McManus and Ledbetter families had flown to the eastern Caribbean island to celebrate Christmas and New Year’s Eve together, in what has been a long-standing family tradition.

Informed sources said Ms McManus, originally from Blackrock, Co Dublin, awoke in her room in the early hours of Wednesday and complained of “feeling unwell”.

Sources said Ms McManus was brought to a local medical centre where she was pronounced dead a short time later.

A Royal Barbados Police spokesman said they had ruled out foul play and were treating it as a sudden death.

A post mortem is to be carried out on Ms McManus’s body to help find a cause of death, which will ultimately determine the police investigation.

A police spokesman said that it was expected that “after the post mortem the investigation will be finished”.

He explained that local autopsies can take “up to a week”, however this would be “up to the pathologist and the coroner”.

Sources described Emma and John as “a very private couple” who have three children under the age of nine, and reside at a luxury property in Chelsea, London.

“It’s terrible, as far as is known Emma had no serious health issues. No one knows what exactly caused her death, there was no warning. Everyone is obviously devastated, it’s massively shocking,” one source said.

“Emma was a vibrant, outgoing person and she was very well liked by everyone; despite their obvious wealth they are two of the most down to earth people you could meet.”

The source added: “We’re especially heartbroken for John and the children, what’s happened is every family’s worst nightmare. John is a really compassionate guy, our hearts go out to him.”

The couple, who were childhood sweethearts, wed in Portugal in October, 2010.

JP McManus, a billionaire horse owner, businessman and philanthropist, reportedly pulled all nine of his horses who were due to race on Thursday in light of the bereavement.

It’s understood Emma, John and their three children were in Limerick to watch the Shannonside hurling team, of which JP McManus has been a long-term sponsor, win their second All Ireland hurling championship in three years, on December 13th, before they flew out to Barbados with family.

Informed sources said the two families were seeking advice on how best to proceed with funeral arrangements, in light of public health guidelines around the coronavirus pandemic and international travel.