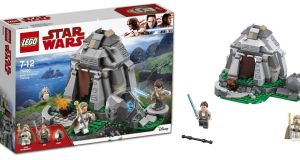 Skellig Michael is to feature in a new Lego set brought out in advance of the latest Star Wars film.

The new set contains a miniature beehive and one of the porgs, mysterious creatures which will feature in the forthcoming movie Star Wars: The Last Jedi due to be released on December 15th.

The porgs are reported to be based on the puffins which live on Skellig Michael, a set of islands off the coast of Co Kerry which are a UNESCO heritage site.

The set, known as 75200 Ahch-To Island Training, will be released by Lego in conjunction with the film. Ahch-To is a watery planet which features in the film franchise.

This play set includes a mock up of a lightsaber strike against a rock wall which features in the trailer to the new film.

The two figurines in the set are Old Man Luke and Rey.

Worldwide recognition of Skellig Michael, a monastic site streteching back almost 1,400 years, came when it was included in the 2015 film Star Wars: The Force Awakens.

It took over $2 billion on its way to becoming the third highest grossing film of all time. The next episode will be expected to come close to that mighty total.

The film brought a surge of visitors to Skellig Michael which is only open during the summer months.