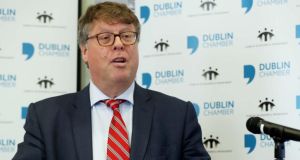 Department of Foreign Affairs official Rory Montgomery said he was “hopeful” the EU and UK could make progress on Border issues before a key summit of EU leaders next month.

British politicians have now got the message about how serious the Northern Ireland border issue is in Brexit talks after not listening carefully to the Irish side, a leading Irish Brexit negotiator has said.

Senior Department of Foreign Affairs official Rory Montgomery said “the British surprise” to the recent EU paper indicating that the North may have to stay within the European Union single market and customs union post-Brexit showed UK politicians had missed the Irish messages about the importance of the Border.

“If I were frank, I would say that maybe British politicians haven’t necessarily been as careful in listening to these messages as they should have been,” said Mr Montgomery, whose official title is second secretary general at the department with responsibility for official-level co-ordination on Brexit talks.

Since the leaking of the paper two weeks ago, there had been “very good dialogue” between the sides. “I think now the message has got through that these are serious issues from an Irish point of view,” he said.

Taoiseach Leo Varadkar has warned London that the Government would block Brexit negotiations progressing to the next phase on future EU-UK relations in December unless the British gave a formal written guarantee that there would be no hard Border with Northern Ireland.

The future of the Border after the UK quits the EU was one of the three areas on which Brussels was looking for “sufficient progress” before permitting negotiations to proceed to a future EU-UK trade deal.

Mr Montgomery told a Brexit seminar hosted by the Japanese embassy in Dublin that he was “hopeful” the EU and UK could make progress on the Border issues before a key summit of EU leaders in the middle of next month and that it was not possibly to say simply: “We’ll sweep them into the second phase.”

The Government had to be “very careful” not to take nationalist or unionist sides over the future of the Border given how debate in Northern Ireland tends to be viewed “through an orange-green prism, he said, but the focus should be on discussing the practical benefit of avoiding barriers “of whatever kind”.

“All this makes it tricky and problematic but we do think that there are pathways forward. We are hopeful that we can get there in the next two or three weeks,” he said.

The absence of a devolved government in Belfast was “extremely unfortunate” within the wider negotiations, he said, as Belfast was missing out on discussions with the Scottish and Welsh on what powers would be repatriated from Brussels to London post-Brexit and on to the devolved administrations.

“The total absence of a Belfast voice from that discussion is really close to unforgivable,” he said.

Mr Montgomery said a considerable amount of work had been achieved between the EU and the UK with the Irish “metaphorically whispering in the Commission’s ear as it negotiates”.

Kazuo Kodama, Japan’s ambassador to the EU, said that while the UK must commit to not undermining the Belfast Agreement and maintain a “soft Border” he understood the British position that Northern Ireland and the Border issue could not be resolved separately from future relations with the remaining 27 EU states.

The ambassador said that regardless of Brexit it was important that the EU “not lose sight of the sheer magnitude” of the proposed trade deal, the Economic Partnership Agreement, between Japan and the EU.

The Brexit seminar was organised by the Japanese embassy as part of a series of events to mark the 60th anniversary of diplomatic relations between Ireland and Japan.

Who is Rory Montgomery?

Diplomat Rory Montgomery is one of the lead negotiators representing the Government in Brexit talks. The other is John Callinan, second secretary-general at the Department of the Taoiseach.

An experienced negotiator, Mr Montgomery was a member of the Irish team which brokered the Belfast Agreement, having spent most of the 1990s working on Northern Ireland issues.

He was Ireland’s permanent representative to the EU from 2009 to 2013 and ambassador to France from 2014 to 2016 before moving to the Department of the Taoiseach with responsibility for EU affairs.

He returned to the Department of Foreign Affairs in October 2016, four months after the British voted to leave the EU. He is second secretary-general and director-general of the EU division at the department, with particular responsibility for the EU-UK negotiations and co-ordinating contacts between officials on Brexit.