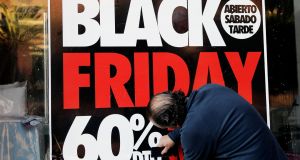 Black Friday did not exist here a decade ago but it has been embraced with so much gusto by so many shoppers and retailers that tens of million of euro will be spent in the days ahead by people with a keen eye for a bargain or more money than sense.

It was invented in the 1930s in the US, where it falls on the day after Thanksgiving Day and is the traditional beginning of the Christmas shopping season. So, in that country, it has a reason to be.

Here? Not so much. But while you might throw your eyes to the heavens when you hear the phrase or vow to never darken the door of any retailer who tries to flog you stuff under the Black Friday banner you will not be able to avoid the notion no matter what you do.

The Black Friday sales started in Ireland last week and everyone from Argos to Woodies (we wanted to say Zara to have the full A-to-Z, but that retailer does not seem to be involved) are promising discounts of anywhere between 20 and 70 per cent.

If you think we have missed a bargain or if you have spotted a deal that we should be highlighting, please get in touch by emailing cpope@irishtimes.com.

All Saints: The super-hip clothes retailer is offering 30 per cent off all stock new and old “for a limited time”. Its website is also promising free delivery on orders of over €150.

Amazon: When it comes to Black Friday, this online giant is not to be found wanting. It has been releasing special Black Friday deals for what seems like forever, and with literally millions of items for sale, you’d be hard-pressed not to find something to catch your eye. Bear in mind you will have to factor in delivery costs and possibly taxes and charges should you choose to buy off its US arm.

Ancestry.ie: Looking for a quirky gift or a chance to go all “Who do you think you are”? Using a simple saliva test you can do at home, you can find out more about your identity and possible relatives, some of whom you may not have even known existed. The test surveys your entire genome at over 700,000 locations and the results provide a prediction of the locations of your ancestors from 26 separate worldwide populations. From now until next Monday, Ancestry DNA kits are down to €59 from €95.

Arnotts: is not having a Black Friday sale. No sirree Bob. It is however having a Christmas Mega Event which sees 20 per cent knocked off most of its stock. There are way more impressive deals to be found on the shop floor, mind you. A five-pan set from Stellar the pot people has been marked down to €189.95 from €449.95, which is not too shabby. A North Face Thermoball Hooded Jacket is €176 and not the €220 it once was, while Snuggledown Goose Feather and Down Duvets with a 13.5 Tog which ranged in price from €190 to €320 now range from €95 to €160.

Boots: A fitbit Blaze which would once have cost you €199 here can now be bought for €159, while a Scholl Velvet Smooth Wet & Dry Foot File which had a price tag of €69.99 now has one of €24.99. Yves Saint Laurent Black Opium Pure Illusion Eau de Parfum Spray 50ml is now €56 when once it was €84, while there are all sorts of other discounts on fragrances that would make someone who paid full price a couple of weeks ago feel just a bit foolish.

Brown Thomas: Just like Arnotts, BT is turning its nose up at Black Friday and is instead having a pre-Christmas sale (no, we can’t really see the difference either) which lasts until midnight on Monday. If you are in the market for fancy bags, glad rags and all the other high-end stuff that you might want to own or buy for someone else in the run-up to Christmas, then now might be the time to shop.

Debenhams: This retailer is promising “seven days of amazing deals” with offerss coming and going on a daily basis. On Wednesday is was offering half-price discounts on duvets, handbags and women’s watches.

Eurocamp.ie: The camping holiday specialists are one of the few companies keeping their Black Friday holidays under wraps until, well, Friday. Their website promises all sorts of deals. We’ll wait and see.

Harvey Norman: News that Harvey Norman is having a sale is hardly news as the retailer appears to be forever shouting (very, very loudly) about its discounted stock. It is going all in for Black Friday and offering up to 30 per cent off TVs, as much as €400 off laptops and up to 50 per cent off tables and chairs. It is also promising to price-match its competitors. Among the deals which caught our attention were a Playstation VR selling for €299, down from €549, some Bose QuietComfort Headphones, down from €329 to €199, and a Dyson V6 Absolute Cordless Vacuum, down from €569 to €349.

Littlewood’s Ireland: There is nothing little about the deals in Littlewoods and it promises up to 50 per cent off clothes, electronics, toys, home appliances, cosmetics, furniture and more. An 8gb Black Samsung Galaxy 7” tablet is €199.99, a discount of €70. A Nest Learning Thermostat which normally sells for €309.99 now costs €229.99, and Calvin Klein Eternity Moment perfume which Littlewoods sells for €89.99 now is just €29.99. The Yankee Candle Christmas Selection Box which – Littlewoods tells us – should cost you €84.99 can be yours for a way more palatable €34.99. There are pages and pages of deals to scroll through and by our count more than a thousand products have been discounted.

Mothercare: If you are in the market for baby kit then now is the time to buy, as Mothercare are running a week of deals offering up 50 per cent off. Each day up until Black Friday sees new products going on offer. A Maxi Cosi Axiss Car Seat which normally costs €279.99 is now €229.99, a Graco contour electra travel cot which has a regular price of €149.99 is €99.99, and Mothercare own-brand strollers are also being discounted or bundled at a reduced cost.

PC World: Not so much a Black Friday “event”, but a Black Tag one. There looks to be some remarkable deals on offer here. A Samsung Smart 4K LED TV is now €539 compared to the €979 it once was, while an 55” Smart 4K Ultra HD LED TV which was €1249 is now €639. Laptops, fitness trackers, speakers and a whole lot more have also been substantially discounted.

Peter Mark: When we were told the “gift of great hair awaits” in Peter Mark, we were down there in a heartbeat as we could really do with great hair (or any hair to be honest). Sadly it is not actual hair the hairdresser is selling but straighteners and the like. There is €25 off selected GHD Stylers, including the GHD Platinum Pink Blush Styler and the Classic ghd IV Styler.

Ryanair: The airline is running a week-long Black Friday promotion – the stand-out deal for us when we were looking at the site was a €9.99 flight to Paris.

Sky: Anyone who joins Sky with monthly subscriptions starting at €29.50 per month on a 12-month contract will get themselves a 32” LG telly.

Smyths Toys: The market for toys is set to reach its annual peak in the weeks ahead and Smyths Toys is likely to be jammers as the big day approaches. It has Black Friday vouchers that can be printed out, offering €6 off if you spend more than €50 and €12 off if you spend more than €100 – although we had a look at the terms and conditions and there does seem to be a lot of restrictions. They have a three-for-two deal on all board games and a My Little Pony Canterlot & Seaquestria Castle is selling from €79.99, down from €94.99. A Lego Star Wars Death Star now costs €364.99, down from €489.99, while a Sporter 1 Pink Scooter With Light up Wheels which once cost €69.99 now costs a tenner less.

TUI: The tour operator is promising discounts of €50 per booking on short and mid-haul package holidays departing up to the end of October next or an extra €100 discount per booking on holidays to Mexico departing between June 4th and July 16th next. You have to spend more than a grand on your holiday.

Virgin Mobile: The company has cut the cost of a key plan by “a whopping 80 per cent” they tell us. So you can get a Virgin Mobile’s €25 Unlimited Plan at the a discounted Black Friday price of just €5 per month for five months. That gives you “unlimited 4G data, calls and text on a no strings 30 day contract”. Play your cards rights with the comapny and you may be able to get yourself a fancy new smart phone at a discounted price too.

Woodies: If you’re in the market for a fake plastic tree for Christmas, can we first say shame on you. And now can we suggest you try here where they are selling at a discount of 50 per cent, and you could save yourself as much as €85. The DIY giant is also offering discounts on pots and pans and paints and 20 per cent off Christmas decorations. Mind you, if you wait six weeks – until December 27th – you’ll be able to get them in Woodies for a whole lot less than that!

1 Covid-19: Public urged to ‘stay at home’ as 1,025 further cases confirmed in State
2 Transmission of Covid-19 on flight into Ireland linked to 59 infections
3 Doctors are being asked to ‘play God’ in deciding who to give flu vaccine to – GP
4 President signs Bill on mother and baby home records into law
5 Two hundred Irish retailers for all your online Christmas shopping
Real news has value SUBSCRIBE