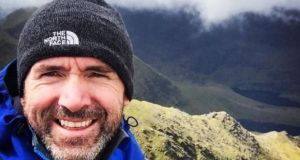 Séamus Lawless is said to have slipped while in the “Balcony area” near the summit of Everest after reaching it last week.

A team of professional and experienced climbers are set to begin a search for an Irish man missing since he slipped and fell on the descent of Mount Everest last Thursday.

From Bray, Co Wicklow, Seamus (Shay) Lawless was part of an eight-member climbing expedition when he went missing after falling at an altitude of 8,300m in the “Balcony area” near the summit.

The 39-year-old father-of-one who works in Trinity College had only just reached the peak with fellow climber Jenny Copeland, their guide Noel Hanna and a Sherpa team and was on the way down when the accident happened.

The search has now turned into a recovery operation in an area known as the death zone where oxygen levels are very low.

The expedition handling agency, Seven Summit Treks, in coordination with the Government and the Lawless family decided to launch a recovery operation above Camp Four on Mt Everest where Mr Lawless was last seen.

Mingma Sherpa, Chairman at Seven Summit Treks, said a team of nine climbers led by Irish mountaineer r Hanna has been formed to begin a search and recovery operation above Camp Four on Mt Everest.

Speaking to the Himalayan Times, Mingma Sherpa said the “Hanna-led team will leave for Camp IV from the base camp later this evening (Wednesday)” with eight high-altitude Sherpa climbers.

A fundraising drive on the gofundme crowd sharing page, set-up by Mr Lawless’ family last Friday has so far raised €260,000.

They aim to raise €750,000 as they have said that they have been forced to look for donations, as the insurance company which provided a policy for Mr Lawless, are currently not providing assistance with the search and rescue operation.

Mr Lawless attempted the mammoth climb to raise up to €25,000 for Barretstown, a charity dedicated to seriously ill children and their families.

One of Ireland’s leading mountaineers and adventurers, Pat Falvey, who is the only Irish person to successfully ascend Mt Everest from the north and south faces confirmed that the search will begin in the next few hours.

He said: “The season is coming to an end and time is of the essence. They have a clean run in of good weather, now for the next seven days so hopefully it will go well. If Mr Lawless fell into somewhere awkward then the team may not be able to retrieve him. Safety has to come first for everyone involved.

In an update, his climbing team said there had been a “brave effort to locate and rescue Shay on Thursday evening and into Friday, with no success”.

The statement said that “unfortunately rescue has now given way to recovery and everyone is cognisant of the dangers and determined not to further endanger the lives of anyone in the process”.

It said the team “want more than anything to bring Shay home, but we are also aware that options are limited due to the altitude and terrain”.

Mr Lawless flew to Nepal in April to spend a month acclimatising to the thin air at high altitudes. He had scaled previously two peaks including Mount Denali in Alaska, the highest peak in North America, last summer in preparation for his ascent.