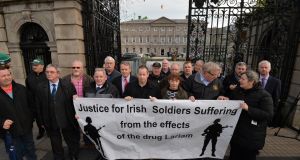 The Department of Defence spent more than €6 million on personal injury settlements and legal costs last year, an increase of 90 per cent.

It marked the first time in at least a decade that Defence Forces payouts eclipsed those of the Garda Síochána. The Government is now dealing with the highest number of military-related personal injury actions since the Army deafness claims of the 1990s and 2000s.

The department, along with the State Claims Agency (SCA), handles all personal injury claims by Defence Forces personnel.

There was also a massive rise in the number of individual cases taken by serving and former soldiers, sailors and Air Corps members. There were 221 new personal injury actions lodged in 2018, up from 118 in 2017, making it the busiest year for such claims since at least the mid-2000s when the Defence Forces were still dealing with Army deafness claims.

This is despite Defence Forces numbers dropping to record lows in recent years due to the ongoing retention and recruitment crisis.

In the decade before 2018 the highest number of new cases lodged in a single year was in 2011, when 133 employees began actions.

Many of the new claims relate to the issuing of the anti-malarial drug Lariam to members serving on UN missions in sub-Saharan Africa. The drug, which is still issued by the Defence Forces, has been linked to insomnia, depression and psychiatric problems.

In 2018, 119 Lariam cases were lodged by serving or former members of the military.

In late 2017 a High Court case resulted in a settlement being paid to a former soldier who had been given the drug. “This, in turn, has led to a significant increase in new Lariam-related cases,” the SCA said in a recent report.

One of the main drivers of the increased costs is a 150 per cent rise in the amount spent on the legal costs of those who successfully sued the department. Plaintiff legal costs amounted to €1.9 million in 2018, up from €782,114 in 2017.

The value of settlements paid out to injured parties increased from €1.98 million in 2017 to €3.38 million last year.

According to data from CourtsDesk, a court monitoring service, 76 cases have been lodged against the Defence Forces or Department of Defence so far this year in the High Court alone.

The cost of defending personal injury and other employment cases has been rising for nearly every non-healthcare State agency in recent years.

In 2010, some €9.7 million was paid out by State authorities, not involved in healthcare, for personal injury cases. By 2017 this had risen to €20.2 million. However, the Defence Forces personal injury costs had typically remained stable – usually amounting to between €2 and €3 million each year – until 2018.

A Department of Defence spokeswoman said there are “a number” of Lariam cases ongoing but declined to comment on what impact they are having on the rising legal costs.

The cases against the department “relate to a broad range of issues arising as a result of military service”, she said.

“Expenditure on litigation is subject to a number of unpredictable variables including the number, value and timing of awards and settlements.”

Norman Spicer, a solicitor with Coleman Legal Partners, and a former soldier, said his firm had about 85 Lariam cases on its books, of which about 40 have been lodged in court to date. None of his cases have been concluded yet.

“It’s my belief the jump in costs are as a direct result in the onset of Lariam litigation,” he said.

He said a number of ongoing cases being taken by former Air Corps members alleging exposure to dangerous chemicals might be a factor, but that these are small in number.

It is understood the Department of Defence has tasked a Dublin solicitors firm, Daniel Spring and Company, with defending all Lariam-related cases.