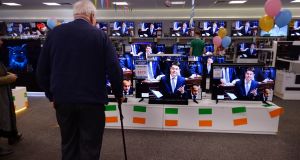 Minister for Finance Paschal Donohoe has delivered a “Brexit budget” amid criticism of the Government over its measures to tackle climate change and the housing crisis.

Mr Donohoe said Brexit was the “most pressing and immediate risk to our economy” and announced a €1.2 billion package to tackle the “increasing likelihood” of a no-deal Brexit.

The Minister told the Dáil:“I am making approximately €200 million in Brexit expenditure available next year.

“It will be borrowed money. If we do not need it, we will not borrow it. If no deal does not happen, it will not be borrowed for other purposes.”

He said: “€650 million will be made available to support agriculture and tourism and those most affected regions. Of this, €220 million will be deployed immediately in the event of a no deal.

“Make no mistake, no deal will be challenging. But it is a challenge Ireland has the measure of.”

The €2.9 billion net budget package includes a €6 per tonne increase in carbon tax and a €1.1 billion allocation to build more than 11,000 new social homes next year. There are no changes to income tax or Universal Social Charge bands but the self-employed tax credit will increase by €150 to €1,500.

Prof John FitzGerald, chairman of the Climate Change Advisory Council, said the carbon tax rise to €26 per tonne was disappointing as the council had called for a €15 per tonne increase. The increase will apply on petrol and diesel from midnight but will not apply to home fuels until May 2020. It is likely to add 2 cent to a litre of diesel and 1.7 cent on petrol. Mr Donohoe said this would raise €90 million next year which would be ringfenced for measures to combat the “defining challenge of our generation”.

To help with an increase in the carbon tax, the fuel allowance paid to those on social welfare will rise by €2 a week. It is paid for 28 weeks from the beginning of October each year to 370,000 households.

“When it comes to really tackling climate breakdown it is the measures other than carbon tax that are crucial, and this budget gives us very little.”

The Irish Council for Social Housing described the budget as “deaf” to the demand for investment in “public housing”.

There is an additional €20 million allocated for homeless services but the Peter McVerry Trust said it was unfortunate this was split across emergency accommodation and prevention measures as well as day services.

An additional €80 million will go to the Housing Assistance Payment scheme, while the Help-to-Buy scheme for first-time buyers will be extended for another two years without any change to its structure.

Tánaiste Simon Coveney described the budget as a “Brexit budget” that would be used “to protect Ireland from the worst effects” of a no-deal exit. He said he hoped that the €1 billion-plus would not be needed as he still believed “a Brexit deal is possible”.

Funding has also been announced in Tuesday’s Budget for the recruitment of 700 extra gardaí, as well as 1,000 special needs assistants, more than 100 special education teachers and 250 special class teachers in the education sector.

A total of 1,000 new frontline staff in the health sector – such as speech and language, occupational and disability therapists – will also be hired.

An additional one million home-help hours will be provided for.

Fianna Fáil finance spokesman Michael McGrath said his party had “afforded the Government the time and space to focus on delivering the best possible Brexit outcome for Ireland” but this budget would be the last his party facilitates.

Sinn Féin finance spokesman Pearse Doherty criticised the budget as “lacking hope”. “This budget could and should have given workers and families a break. It hasn’t.”

Labour Party leader Brendan Howlin told RTÉ: “The poorest cohort of people will be worse off as a result of this budget. That’s simply unacceptable.”

The Irish Farmers’ Association president Joe Healy said the funding provided for the agri-food sector will fall short of what will be needed as Ireland faces “an agricultural Armageddon”.

“While the €110 million committed to the Department of Agriculture for next year is a step forward, much more will be needed now as farmers are already suffering huge losses due to Brexit uncertainty.”

Mr Donohoe said a new energy efficiency scheme targeted at social housing stock in the midlands, an area affected by the potential closure of Bord na Móna and ESB power stations, would create new, sustainable employment in the region.

A new “just transition fund” will be allocated €6 million to help those communities. He said a “transition commissioner” would be appointed shortly.

The 1 per cent diesel surcharge introduced last year will be replaced with a nitrogen oxide emissions-based charge. This surcharge will apply to all passenger cars registering for the first time in the State from January 1st, 2020.

The rate of stamp duty applicable to non-residential property transactions will increase by 1.5 per cent to 7.5 per cent from midnight, in a move that Mr Donohoe says will bring in almost €140 million.

It is the second time in three budgets the Minister has increased the rate of commercial stamp duty, having brought it from 2 per cent to 6 per cent two years ago.

The Government will spend an extra €384 million on boosting rural transport and projects such as new cycleways and improved infrastructure for electric vehicles.

The Minister said current expenditure in health would increase by 6.3 per cent to €17.4 billion.

The National Treatment Purchase Fund will get an additional €25 million next year to tackle hospital waiting lists, bringing its budget to €100 million.

There will also be a €5 increase in the living-alone allowance from next March, as well as increases in dependent children allowances.