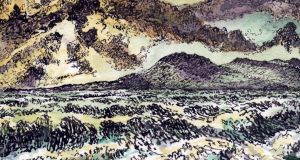 ‘With Lorenzo at full tilt or not, its kind seems sure to proliferate as a warming Atlantic draws hurricanes north.’ Picture: Michael Viney

In what I hope will not become a habit, I was dispatched to the safety of a hospital bed on the night the nation spent dreading Lorenzo, leaving Ethna stoically alone in our house above the sea.

On the last and similar occasion, I had ducked the “worst thunderstorm ever in Mayo”, lightning splitting the sky over Castlebar Regional and the thunder shaking us all in our beds. But while I lay listening for Lorenzo’s arrival, picturing the toppling of our trees, the polytunnel shredded or airborne, Ethna slept soundly, undisturbed by little more commotion than a regular autumn storm.

My brief admission this time was for the sort of “’tests” that now sustain the aged past their sell-by date. They included a lengthy reacquaintance with the caverns of my heart, the muscles on the screen a bit frayed after 86 years of flapping, and their echoes, played at volume, like those of dyspeptic goldfish. Long may it glug away.

My ward companions included some elderly Mayo farmers, whose exchanges across the room rang with disillusion about the profitless future of their kind. The only reason he’d kept his sheep, one said bluntly, was for “the headage”.

With Lorenzo at full tilt or not, its kind seems sure to proliferate as a warming Atlantic draws hurricanes north. Even rainier winters already soak the west. As Lorenzo loomed on the horizon, a seafront resident of Lahinch, Co Clare who told RTÉ that “I can’t take another winter here” was speaking for many of her mind.

Autumn and winter have been our own favourite seasons – July and August we could do without. Glowing landscape colour, a lower, sculpting light gives Connacht a thrilling beauty. So, too, do painterly skies and theatrical sunsets, if now somewhat shorn of innocence.

Set against these pleasures, annually and dependably enjoyed for some four decades, the regular storms have been endurable. Before double glazing, we watched their gusts bowing the window glass; before better insulation, we sat with coats round our knees.

While pretty sure of the worst that could happen – 100-mile gusts at Belmullet, say, and a metre or two off the dunes – we could get out the candles and Scrabble and enjoy what was left of the wine.

Twenty years ago, in his seminal book The End of Nature, American environmentalist Bill McKibben predicted the human disquiet and stress inseparable from nature’s loss of autonomy. The new uncertainty and dread, such as attended the approach of Lorenzo, along with the winter’s deepening shroud of rain, will take a toll of many in the west who might have sought a gentler retirement. It could come to shape the west’s demography, as more and more holiday homes stay empty even longer in the year.

In the northwest reaches of Mayo, “rewilding” has begun in the creation by Coillte of a quasi-wilderness in Ballycroy National Park

Climate change will affect the landscape as well, as more and more small farms are planted with conifer forestry, not least by inheriting relatives living and working elsewhere.

In 2016, Teagasc published a research paper by two eminent foresters on the potential availability of land for afforestation. To achieve a “carbon neutral agriculture” by 2050, planting is to cover almost a fifth of the Republic.

The researchers pored over the national map of land use to find the extra hectares. Most were in Monaghan, Cavan and Leitrim, with more big patches in Kerry, Limerick and west Cork. But there were also stretches of Atlantic coast, right down to the ends of the scenic promontories of west Cork.

The authors were clearly sceptical of attaining the Government’s targets without “significant efforts . . . to stimulate land-use change”. But also, and surprisingly, they seemed to ignore the coming realities of climate change. “Wind” and “storm” appeared nowhere, nor the “windthrow” that has already toppled many thousands of shallow-rooted Sitka spruce in rain-soaked soils.

Such rural recruits, seeking small pockets of land, should now be welcomed and helped to settle

With such likely attrition, what other futures come to mind?

In the northwest reaches of Mayo, “rewilding” has begun in the creation by Coillte of a quasi-wilderness in Ballycroy National Park, where self-seeded lodgepole pine is inextricably tangled by the wind. Such fortuitous landscapes could offer tourists red deer and wild boar – and even, eventually, the odd howl of wolves.

The west has long attracted young settlers of “alternative”, nature-friendly casts of mind. In hilly Leitrim, notably, the Organic Centre at Rossinver is a thriving hub of vegetable-growing and traditional crafts and skills.

Such rural recruits, seeking small pockets of land, should now be welcomed and helped to settle. They match the first glimmers of local self-sufficiency that many small towns are now showing in country markets and other community resources.

McKibben, scanning the world for models of resilient ways to live, was struck by the myriad market gardens of Cuba, for good and bad a fortress island. The west of Ireland, too, besieged by storms, would grow great vegetables – if not, perhaps, the taller, wind-throwable Brussels sprouts.