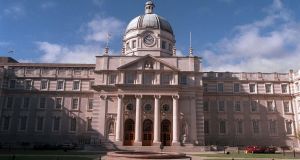 Minister for Finance Paschal Donohoe Mr Donohoe began delivering his speech at 1pm. An hour has been set aside in the Dáil schedule, and his speech will be followed by several hours of debate as the Opposition finance spokesmen and women give their responses.

Each party/grouping has been allocated an hour; Fianna Fáil is first, followed by Sinn Féin, Labour and then the smaller parties. Spokesmen and women will rifle through the budget books, looking for measures they object to, while party researchers do the same in their offices, rapidly texting through updates and suggestions to the Dáil chamber.

Meanwhile, a host of interest groups, industry representatives, NGOs and commentators will be having their say, many holding press conferences, briefings or releasing instant responses in a bid to influence the reception of the package. There will be blanket media coverage throughout the day.

These initial few hours are always the most nervous period for government, as ministers and officials hold their breath to see how the budget is received. Their great fear is that some unforeseen landmine will detonate underneath the package, some overlooked detail or anomaly will suddenly appear and threaten the entire budget. If, like this budget, the package has only been finalised late and in haste, the danger is more acute. If a U-turn is required, it’s always best for a government to signal that quickly. “That will be something we will look at in the finance Bill/social welfare Bill,” is a line you’ll often hear.

In the Department of Finance there is a meeting room in which portraits of every past minister since the foundation of the State looks down on proceedings; in the mind of every official is the example of all the budget disasters that befell previous unsuspecting ministers.

Ministers will seek to control the narrative by staggering a series of press conferences throughout the afternoon. pm, after which financial resolutions will be voted on until midnight

2.45pm: The first press conference, centred on the budget’s Brexit provisions, will be held at Government Buildings, led by the Tánaiste Simon Coveney and attended by several Ministers. Press conferences hosted by the departments of climate action, business, social protection and agriculture will follow throughout the afternoon. Other departments will hold their budget press conferences on Wednesday and Thursday.

Opposition parties meanwhile will be holding events in Leinster House, seeking to push their criticisms of the budget and disrupting the Government’s narrative.

7pm: Mr Donohoe will host the finance press conference at Government Buildings, while he is also likely to conduct interviews for radio and television news bulletins.

Back in the Dáil, the House is scheduled to rise for a break between 9pm and 9.30pm, if required.