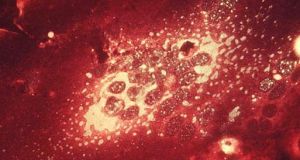 The measles virus. There have been 41,000 cases of measles and 37 measles-related deaths in Europe during the first six months of the year.

The number of measles cases has risen sharply in recent weeks to 89 for the year to August 21st, according to the latest report from the Health Protection Surveillance Centre (HPSC).

For the first 17 weeks of the year there were usually about three cases a week, with occasional increases to between six and eight. However, since the end of July about seven cases a week have been reported to the HPSC, with 11 notified in the week ending August 14th.

It comes amid a resurgence across continental Europe, particularly in France, Italy, Greece and Romania. There have been 41,000 cases of measles and 37 measles-related deaths in Europe during the first six months of the year.

Dr Suzanne Cotter, a specialist in public health medicine with the HPSC, said there had been occasional “scares” when parents decided not to vaccinate children, and anyone born since 1978 who was uncertain about their vaccination status should check with their GP.

More than a third of Irish cases this year were among under fours (37 per cent). Dr Cotter said two doses of the MMR (measles, mumps and rubella) vaccine were usually necessary to provide long-term immunisation. She said the first of these was usually given at 12 months, but this could be given after six months if the baby was travelling to an affected region. The second dose is normally given at 4-5 years of age, but can be brought forward in case of risk.

There have been six separate and well-defined outbreaks in the State this year. The vast majority of cases have been in the HSE East (41 per cent) and HSE Midwest regions (36 per cent)

Since July, in Dublin’s north inner city alone, there have been 13 measles cases in adults and children. Transmission has occurred in Dublin hospitals and in households with poor vaccine uptake.

Before the emergence of vaccines in the early 1960s, measles killed about 2.6 million people a year. The current vaccine, now in use for more than half a century, is considered safe, effective and inexpensive .

The initial symptoms of measles include a high fever, beginning about 10 to 12 days after exposure to the virus. Measles can cause chest infections, seizures, ear infections, swelling and, potentially, brain damage.