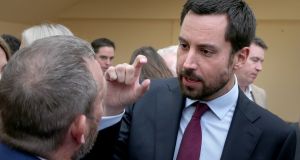 The housing crisis dominated the first day of the Fine Gael think-in in Galway on Thursday, with Taoiseach Leo Varadkar stressing that there were no quick fixes to a long-term problem, while Minister for Housing Eoghan Murphy unveiled another initiative to tackle the problem.

An animated Murphy – under increasing political fire from the Opposition and interest groups as the numbers in emergency measures creep towards the 10,000 mark – said he would take over functions from local authorities and directly implement housing policy unless they followed his instructions.

Varadkar also (re)announced the imminent establishment of a State agency to intervene in the housing market.

Although Murphy did not name the local authorities in his sights, it is understood they are the four Dublin councils, though sources said there were different failings in each area.

The move represents a departure for the Government as it struggles to deal with a housing crisis that has pushed its way to the centre of the political agenda.

Previously Government sources engaged with the issue were wary of criticising local authorities directly or making direct interventions as they feared it would discourage councils from moving ahead with projects. That reticence now appears to have been overcome. This is partly because Ministers want local authorities to take their fair share of the responsibility – and the blame – for the crisis.

Both Murphy and the Taoiseach have been stressing the role of local authorities of late. Exactly how the councils respond to this remains to be seen. Yet the move is an admission not just that the crisis requires new interventions, but that the political stakes are rising.

Murphy in particular now looks like a man under pressure. During one media encounter on Thursday, the Minister for Finance Paschal Donohoe weighed in to support him; in an interview with The Irish Times earlier this week the Taoiseach did the same thing. Murphy’s discomfort is likely to be one of the political tropes of the autumn.

Elsewhere the chatter was all about the next election. Varadkar again stressed that he wanted stability for two more years, not a general election. He also said that election preparations were continuing.

Mingling among the TDs and Senators in the Galway Bay Hotel were the party’s candidates already selected to fight the next context whenever it comes. In his opening address the Taoiseach listed them one by one.

After all the shape-throwing with the letters between Varadkar and Micheál Martin, it’s clear that once the future path of the Brexit process is clear – perhaps not until December – the Taoiseach will be in a position to say to Martin: extension or election, you choose. I’m ready either way.

Conversations with his TDs suggest that the views in the party are mixed. Secure in office, most Ministers don’t really want an election (though some do), while other views differ.

“I want an election as soon as possible,” said one hungry candidate. “Though I can’t see it happening until spring at the earliest.”

“I don’t want an election,” says a TD. “Talking to people on the ground, they don’t want one either.”

Another TD observes: “It doesn’t matter what we think. Leo will make the decision and we’ll row in behind it.”

Others in Galway nurse the niggling worry that the outcome of the election will depend not on when exactly it occurs, or on what premise it is called, but on concrete progress on issues such as housing and health. Both areas are stubbornly resistant to quick fixes – or even moderately paced fixes.

The message the Government sought to convey from Thursday’s gathering was that Government policy on housing was working but it would require more time. The other message was that the election drumbeats will continue in the mid-distance.

Nobody seemed bothered about the contradiction.