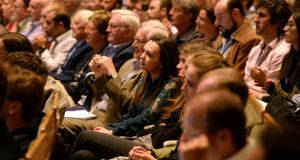 The audience at the Schrödinger at 75 conference, organised by Trinity College Dublin at the National Concert Hall, Dublin. Photograph: Dara Mac Dónaill

Direct intervention in the ageing process itself will soon help reduce illnesses associated with getting old, and increase lifespan and quality of living, according to an eminent evolutionary biologist.

Contrary to the widespread perception, ageing is a very flexible, malleable process, Prof Linda Partridge said at the Schrödinger at 75 conference in Dublin on Thursday. “We all get old but it’s possible to actually change the end of life so there’s not so much disability and illness.”

The existence of “universal genes” across species have been identified which could increase lifespan, Prof Partridge said.

A number of laboratories have created “long-lived mice” which show remarkably broad improvement during ageing so they have less diabetes, and better bones, skin and eyes.

As a consequence it was possible to intervene by targeting “very simple genetic lesions” with drugs. “So there is really a prospect of intervening in the ageing process itself to try to prevent these horrible age-related diseases,” she said.

This brings the possibility of reducing cancers, neurodegenerative diseases and cardiovascular diseases associated with ageing, added Prof Partridge, who specialises in research on Alzheimer’s disease and Parkinson’s disease.

It is very hard to predict when humans might reach an ultimate age limit, she said, though “obesity may have something to say about life expectancy in years to come”.

While women outlive men by some distance, unfortunately they have to deal with much longer periods of illness as they age, Prof Partridge noted.

Ageing is the major risk factor for dementia, neurodegenerative diseases and cancer. As a consequence, scientists were concentrating research on “compressing” the period of illnesses linked to getting old, and on intervening in the ageing process, having learned about the genetic profile of animals that live longer and rarely get cancer.

With some predictions that babies born today will live to 150 years old, science needed to find ways of overcoming incapacity and “a morbid way of living”, said zoologist Prof Emma Teeling of UCD. This was against a backdrop of a World Health Organisation prediction that by 2050, there would be a 300 per cent increase in people over 80.

The study of model organisms that defy ageing was helping address this issue facing society, she said. Bats – “beautiful, glorious creatures” – live way longer than expected, do not get cancer, and defy the conventional belief in nature that if you “live fast”, you “ die young”.

After many years studying the species in France and in her laboratory, she has concluded their critical characteristic is the ability to increase the maintenance of their DNA (genes) as they age.

The development of genomic tools that enable the entire genome of animals to be mapped cheaply and quickly, and the possibility of altering and repairing their genetic make-up, had transformed zoology, she said. This had re-written the evolutionary history of mammals, “and yes, humans are more like rats, than cats”, she added.

Most importantly, it would lead to greater understanding of where humans fit in the genealogical tree of life. Study of the behaviour and unique traits of animals, which could potentially lead to understanding of animal consciousness, was also needed.

Adding in the use of technology that enables genes to be repaired or replaced, would enable species diversity to be restored and reduce the effects of ageing. This would also lead to better outcomes for humans and the ability to age better.